A lot of Christmas-themed slots were launched this holiday season and a lot of the titles were traditional in every way. Elk Studios, as usual, stepped out of the box with their Taco Brothers Saving Christmas online slot, using their popular Taco Brothers machine as base for this year’s holiday release with a jolly twist!

The game was released in November 2016, and shows us how a traditional Mexican family, which we all know and love, deals with problems caused by the evil Captain Diaz during the holidays. Join the townspeople of Santa Maria and bring back the holiday cheer to their humble homes by helping Paso, Pepe, and Pico chase down Captain Diaz across 243 winning lines.

If you had the chance to play Taco Brothers the original release, you’ll be familiar with the symbols involved. Paso, Pepe and Pico are the main characters, accompanied by a guitar, a cactus, a bottle of tequila, a lantern, a shovel and various special icons.

Reels are shown in a standard 5×3 formation, but you won’t be able to complete regular pay lines. Instead, you’ll benefit from a modern 243 ways to win payout system. Starting from the leftmost reel, you only need to line up three or more identical symbols to create a winning combo.

Taco Brothers Saving Christmas offers you 3 betting strategies: Jumper, Leveller and Booster. Coin size ranges from $0.10 to $50, which accommodates all kinds of players, whether they are cautious amateurs or experienced high rollers.

It would be a shame for such a colorful slot not to have matching bonus features, equally creative as the game’s design. Luckily, Taco Brothers Saving Christmas slot has an assortment of special features starting with Wilds. A Christmas tree bell is one of the Wild symbols, whereas the game’s logo is the other.

The logo of the game also works as a Scatter that triggers a Re-Spin feature. 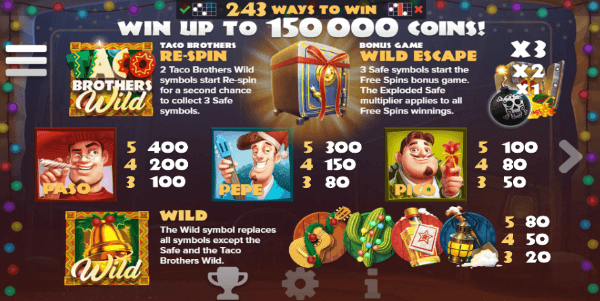 The Safe Bonus symbol is attached to the Wild Escape bonus game. It is a Free Spins round, all spiced up (just like Mexican food) with multipliers and so-called Running Wilds. These are represented by the Taco Brothers themselves every time one of them lands on the fifth reel. As a Taco Brother Wild moves, it seems as if he’s running and performing a Wild Escape.

Captain Diaz will be persistent in his intent to put all three Taco Brothers behind bars which will eventually end the round. The lovely Señorita will try to help the brothers and award your efforts with more free spins.

If you like Christmas-themed slots but you’d like something a bit more original, head out to your favorite casino and load Taco Brothers Saving Christmas slot. It is fun, beautifully designed and has a bunch of entertaining and profitable bonus features.

The RTP is 96.4%, which makes it the highest paying Elk Studios slot, together with Wild Toro and Poltava slots.  The volatility is relatively low and the game delivers smaller, but frequent wins.