3 Genie Wishes, do not mix with Three Wishes slot by BetSoft,  is a superb Pragmatic Play online slot, themed around Aladdin and other characters from a collection of Arabian tales 1001 Nights.

It’s a rewarding 4×5 slot with above average payout and the potential of winning 500x your bet during the bonus feature. Every time you trigger the bonus feature, Genie will let you make one of three wishes, with a prize to follow!

There are a total of nine symbols in the game, five high-paying ones with artwork, and four low-paying card symbols that really don’t pay that much. Three main symbols are based on three most popular characters from 1001 Nights: Aladdin, Scheherazade and Ali Baba. There’s also a Parrot and a Monkey.

Genie and the Lamp are the main symbols in this theme, especially as the Genie appears during the bonus feature and can give you a fantastic prize. All the symbols and characters have beautiful artwork, and the bright blue glow surrounding Genie is just awesome. It just once again proves that Pragmatic Play are very competent when it comes to graphics, and aren’t behind high end slot developers, such as NetEnt or Play’n Go.

The lamp is the Scatter symbol and it only appears on the reels 1, 3 and 5. When you land all three, you will have let the genie out of the lamp, and he’ll grant you a wish! He’ll give you three items to choose from and they’ll hold four prizes: Small Award that gives 1x win, High Award that gives from 10x to 500x win, and two versions of free spins – one with Raining Wilds and the other with Sticky Wilds. 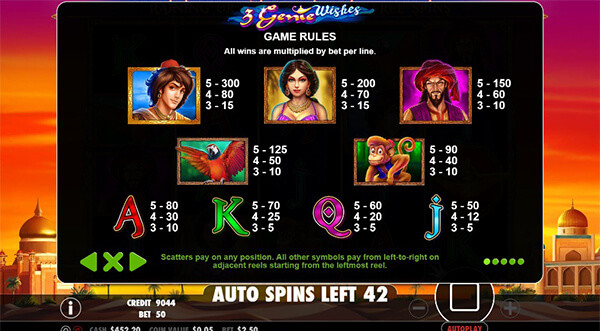 Raining Wilds will give you 10 free spins. During every spin Wilds are added to the reels randomly, but are removed for the next spin.

Sticky Wilds will give you only 6 free spins. During every spin Wild symbols are added in random positions and they remain in place for the whole duration of the free spins round. Despite the lower number of spins, this is the more rewarding game of the two.

The theoretical payout (RTP) of 3 Genie Wishes slot is 96.53%, which is good. All players who like slots with a big payout hidden behind the bonus feature will love 3 Genie Wishes, especially because of that variance that comes from picking a prize. This just makes the reward – when it comes – matter more.

We all know Genie from the Lamp is supposed to give you a big prize. That’s exactly what you can get in 3 Genie Wishes. The maximum prize of 500x will be $125,000 in case of a maximum bet of $250. The free spins games are potentially very rewarding as well, so it all sums up into a fun and rewarding slot playing experience.