Rolled out in 2012, After Night Falls quickly became one of BetSoft most popular slots and it is not difficult to understand why. Engaging storyline, cinematic graphics and an abundance of extra features make the game incredibly interesting to play, while very good base line wins and theoretical maximum payout of 1,550,000 coins only add to the excitement.

After Night Falls slot is currently ranked #3 on our list of Top payout Betsoft slots with 97.2% RTP, after  Good Girl Bad Girl and At the Copa.

After Night Falls is played at five reels and up to 30 selectable paylines, whereas the player is given a choice between six coin denominations in the $0.02-$1 range. That should suit penny and high limit slots players. Auto Play, Bet Max and Double Up options are supported.

When it comes to game icons appearing on the screen, these include the loveable detective Rousseau, a cat, jewellery, security camera, classic TV, thief’s bag, criminal, granny and magnifying glass, with each of these icons triggering a nice animation when it forms a win on the reels.

Magnifying Glass occurring in any position trigger the Moving Wild, where the symbol moves one position to the left, creating free spins until it disappears from the screen. 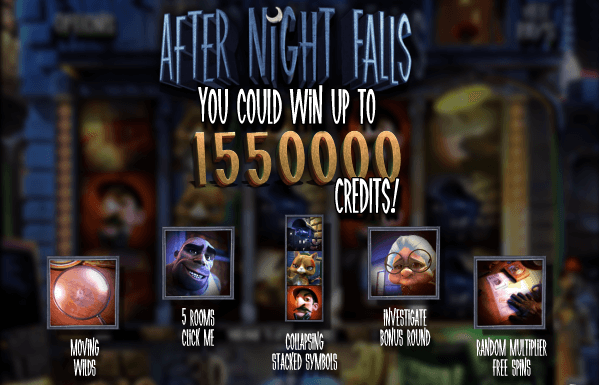 Three or more Criminal icons anywhere on the reels unlock the five rooms Click Me feature. Select rooms for the criminal to steal credits from and keep doing so until Collect is chosen.

Stacked Collapsing Wilds feature awards 3x symbol payout each time an entire reel contains the same icon. When that happens, the symbols merge into one, allowing two more icons to fall in their place.

After Night Falls ticks all the boxes and is quite easily one of the best video slots we have reviewed so far. Chances are you will be impressed with the overall visual appeal, decent main game payouts and a plethora of bonus features that are not that difficult to unlock. All things considered, we can definitely recommend the 2012 release to our readers. You can play this slot for free here or play it for real money at one of our recommended BetSoft casinos.