Black Diamond is a classic 25-payline gem slot game by Pragmatic Play. It offers decent payouts for a low variance game. There are two bonus features, the free spins game with 10 free spins and the bonus win which gets triggered by three Bonus symbols.

When it comes to Pragmatic Play casino slots, this is definitely not the best of the bunch. Wolf Gold or New Tales of Egypt are far more attractive visually, while Caishen’s Gold just pays better, so we are really not sure about this one.

The game has eight paying symbols, and the Red Gem is the star of the show as five-of-a-kind pays 6000 coins. For comparison, the next-best thing, the Blue Gem, pays 1000, and the Purple Gem pays 500. Paytable is good enough to make this game quite powerful in the base game already, and some big wins are possible. Black Diamond is the Wild symbol and it substitutes for all symbols except for Scatter and Bonus.

All the symbols are nicely drawn and could be mistaken for real gems, and really stand out on the black background. This kind of graphics and theme will appeal to all gem slot game lovers though the primary audience of this slot are classic slot players.

There are two bonus features in Black Diamond. The first one is the free spins game, and the other one is a bonus win. Bonus symbol, which only appears on reels 2, 3 and 4, needs to be part of an active payline in order to trigger the bonus win. This bonus win is a nice addition to your bankroll when it happens, but not something that will make your playing session a winning one in its own right. 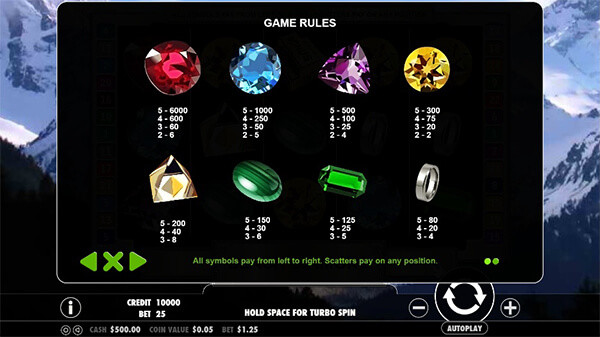 The only good thing about it is that it gets triggered quite often as it takes only two symbols to make it happen, and the feature can be re-triggered for 10 more free spins, which is also something that can happen sometimes.

The game doesn’t pay much during the free spins game, which many slot players will take as a sign that the game must pay well during the base game. And it does, the variance of Black Diamond is quite low as a result, and it’s probable that you’ll be able to play for a long time without your bankroll taking a serious dent.