Despite being one of the oldest known civilizations in the world, China has seen its fair share of internal conflicts. It would reunite, become powerful before war split the great country once more. And in such anarchy, it would only be fair for us to snag a few treasures. Purely for safekeeping purposes, of course! Somewhere far, far away from the war. Like, say, in the balance of our gambling bank account!

Two crimson lanterns serve as a cool split between the reels and the background image. The slot is played on a 5-reel, 3-row playing field with 20 fixed paylines. Available special features include free spins, a Wild with a 2x multiplier and a Wild creating Dragon!

The glimmer of gold and valuables make for a tempting call for the most adventurous among us. If you decide to undertake the journey, we wish you good luck and many wins!

Why to play Chinese Treasures

Simple but lucrative special features are the bread and butter of slots! You’ll need these bonuses if you’re gunning for the top prize. So if you’ve wagered, let Chinese Treasure show you its treasures! 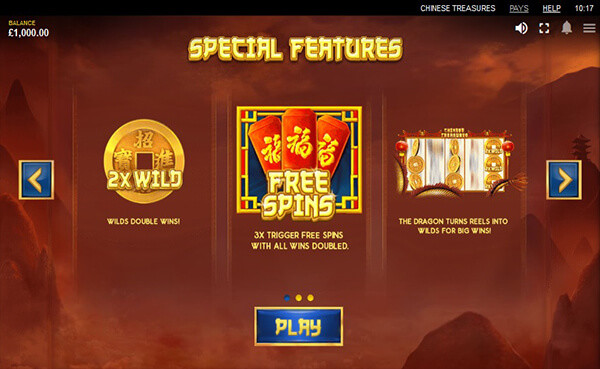 Collect three Free Spins icons anywhere on the reels to win the extra turns. It is possible to win additional free spins by finding three Scatters while the existing extra turns are being played. Oh, and did we mention that all wins during free spins are doubled in value?

Beyond its usual role at substituting for any icon that isn’t a Wild, this symbol can also double any win it is a part of. And yes, you can combine this with the 2x multiplier from the free spins, allowing you to score even better prizes!

Last, but not least, is the Dragon! When it appears, up to three reels will be turned into Wild symbols. This doesn’t guarantee a win, but if you manage to get three Wilds, your odds drastically improve.

Red Tiger has the game’s atmosphere nailed down perfectly. But there’s no denying all Chinese Treasures slot visuals feel a bit old and outdated compared to what’s on offer. Fortunately, gameplay and a good math model swoop in to save the day! An above-average RTP, a satisfying jackpot and engaging special features were all instrumental in ensuring a positive score for Chinese Treasure.

Give it a try, you won’t regret it!