Couch Potato is a classic slot powered by Microgaming, and is, by far, the simplest you can get when it comes to slot machines and their rules. With 3 reels and only 1 payline, the old-school title may be a great choice for complete beginners, since the paytable is very easy to grasp.

One of the biggest draws of the quirky release is the generous Wild symbol, represented by a Couch Potato TV set which, besides substituting for other symbols, comes with a 5x multiplier attached to it. Land two of those and your win will be multiplied by even 25! Overall, it brings the RTP of the slot to 97.43%, #4 on our Best Microgamings Slots list.

The good news is that, unlike some other retro slot machines by the same casino provider, this one is also available for playing on mobile devices, so you can try your luck on the go while delighting in the fast-paced and highly lucrative gameplay.

In all honesty, Couch Potato slot introduces a rather creative theme that we have never encountered before, at least not in the vast and diverse portfolio of slot titles. At first glance, it may seem that the slot developers promote laziness and inactivity, but that is definitely not the case, in spite of the fact that the laziness does pay off, but only when playing this particular game!

The graphics are really basic and old-school, with the reels being populated by traditional symbols such as cherries, single, double, and triple bars, as well as lucky 7’s. The TV set with the game’s logo on it acts as Wild and is the most rewarding icon on the reels.

Couch Potato is devoid of usual Bonus features and special symbols that you usually find in more recent and advanced titles. Instead, the game’s focus is on the Wild symbol, represented by a TV set with a Couch Potato logo sign on it. It assumes three different roles and can award an incredible top prize of 15,000 coins, when all three coins are played, of course. 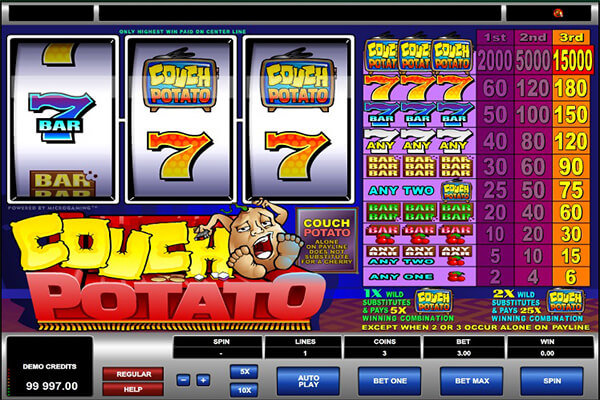 If one or two Wilds contribute to a winning combination, they will multiply the win by 5x or 25x, respectively. These icons can additionally replace all other symbols so as to create a win. Finally, cherries are interesting in that they offer payouts for landing only one or two of them on the payline.

Given the features and the simple and clean layout, Couch Potato may be more suitable for beginners, or those that simply enjoy classic slot machines: 77777, Double Diamond and others. The title can be played using three different coin values, that is $1, $2, and $3, but players are free to choose all three coins on the line, which we warmly recommend, since it significantly boosts players’ winning power and is the only way you can qualify for the top prize of 15,000 coins.

Unfortunately, the video slot excludes Bonus rounds, but, nevertheless, offers a very decent potential for grabbing a hefty cash prize in the end. With an above average return to player (RTP) of 97.43%, the Microgaming release may be one of the most lucrative ones when classic titles are concerned.