5 Great Star is a classic slot (although it is a new release launched in 2019) that takes players back to the era of physical machines. Back when you had to wait your turn on the machine, grumbling the whole time. When we smashed buttons super hard for luck and swore that the owner rigged the machine. Now that we think about it, we can do without returning to those dark ages. But if you feel like revisiting a fruit machine, 5 Great Star is as good a game as any!

The user interface makes it clear that EGT tried to copy the physical machine design. You have a standard 5-reel, 3-row playing field with 5 fixed paylines in total. There is only one bonus, which grants one of the four progressive jackpots randomly after a spin finishes.

As usual with EGT online slots it brings the experience of playing a land-based title straight to your device of choice. The only thing you need to do is pick your favourite, and go wild!

Why to Play 5 Great Star Slot

5 Great Star only has one special feature: the four progressive jackpots.

After a spin finishes and all wins are granted, there is a chance the progressive jackpot bonus activates. Players are taken to a separate screen where they pick between twelve cards. The first three matching card suit symbols will reward the corresponding progressive jackpot. 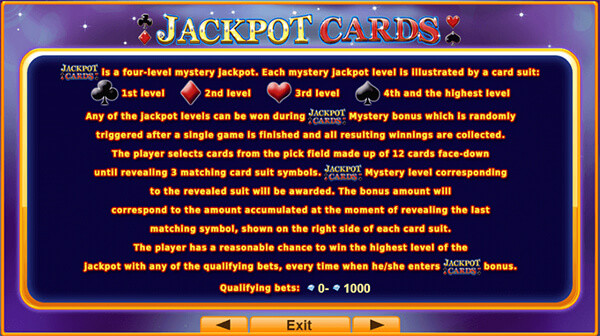 After playing this slot for a little while, we really cannot say we like it. The lack of content feels awful, and spinning aimlessly in hopes of winning the progressive jackpot is just not fun. It feels like EGT has been making the same game all the time, with only minor changes here and there to make it feel fresh. Do yourself a favour and skip 5 Great Star – it would not be worth even a single star, let alone five.