The aforementioned dragon statues coil around the shrine’s pillars, serving as a border between the reels and the background image. You play this slot on a 5-reel, 3-row board with 10 fixed paylines. Special features include paying from any position, dragon coin mystery symbols and the Dragon’s Help.

If you think you have what it takes to earn the blessing of the dragons, then you better start spinning! After all, that awesome top prize won’t win itself!

Why to play Dragon’s Luck Slot

Luck will be a key factor at whether or not you’ll stay as a winner, or leave with your pockets empty. But if you’re feeling bold and fortunate, you have these bonuses to look forward to. 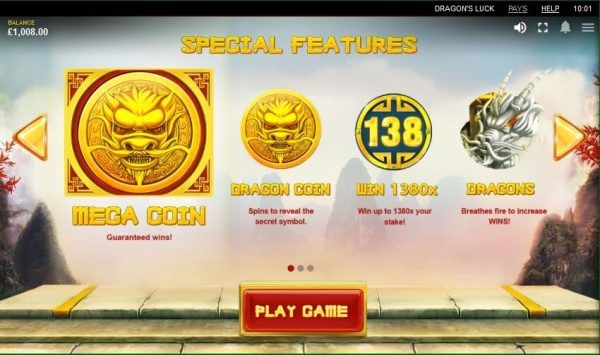 This golden coin usually appears in groups, but we have seen exceptions. Once all the coins land, they will rotate to reveal a symbol from the playing field to fill in for them. All coins will always display the same icon.

The two stone statues on the side may look cool, but they also serve a function! When dragons on either side wake up, they’ll spin the coins again for bigger wins.

Every now and then, you’ll be able to see this huge, 3×3 symbol appear on the board. The end goal is to ensure a big win appears and that happens almost all the time. Kind of hard to miss a win with so many of one symbol on the board, unless you’re super unlucky.

Paying from All Positions

Rather than just awarding wins from left to right, Dragon’s Luck can grant them from anywhere. Not just left to right and right to left, either! We’ve seen three-of-a-kind wins which are entirely in the middle, not connecting to either edge.

We could go on and on about how fantastic the visuals are, or how satisfying the jackpot is. But we’ve already covered all of this in the review! It has a few minor flaws, but those are minuscule compared to the benefits it provides. This slot has our seal of recommendation. Go ahead and give it a go!