Here is yet another opportunity to enter the world populated by Ancient Greeks and potentially benefit from special powers of their gods. Zeus and his spouse Hera are the only ones that have agreed to join the party organized by Pragmatic Play and both are willing to pay more than any other game symbol.

Greek Gods is a fairly volatile game with 243 ways to win and multiple special features. Players can spin its reels for €0.25-€125 and win up to 1,000x the stake. Graphics are pretty basic and the dramatic tune that accompanies spinning of the reels may or may not be to your taste; fortunately, one has the option to turn both ambience music and game sound effects off.

Why to Play Greek Gods Slot

The Pragmatic Play title comes packed with bonus features that can boost your winning chances throughout the game.

During the base game, random awards appear above reels 3-5. They come in the form of instant cash wins of up to 50x the total bet, Free Spins and an entry into the Wheel of Fortune bonus game. The prize is won when a full stack of Scatters lands on the respective reel.

Scatter depicted as lightning appears on reels 3, 4 and 5 during the base game and all reels when one starts spinning for free. Players can trigger Free Spins feature which uses special reels either by hitting at least 5 Scatters or via the random award described above. The first option provides 3 free games plus an additional one for each Scatter. Random award wins you 8 Free Spins in the base game and 5 during the Free Spins feature. It’s possible to get up to 36 Free Spins outside of the feature and retrigger up to 40 free games on the same spin during the bonus round.  It should also be mentioned that random awards show on top of all five reels for as long as the house pays for your spins.

The Wheel of Fortune bonus game plays in a familiar manner (you can see versions in Zeus God of Thunder or in Quick Hit Cash Wheel). Spin the segmented wheel and you’ll win a random prize of 10x-1,000x the total stake. 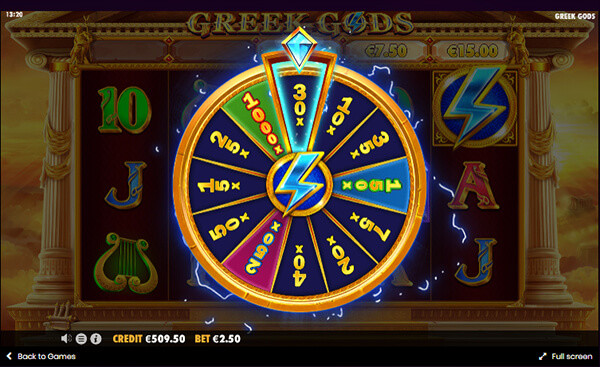 Greek Gods slot fails to provoke a strong reaction despite the fact that it offers several interesting ingredients. That may be due to a somewhat dated look that doesn’t arouse any emotions unlike some other titles inspired by same deities. Various random awards and multiple ways to trigger free games may compensate for the lack of visual appeal. The question is whether the top reward of 1,000x the total bet is tempting enough to motivate trial.