Hot Safari is a Pragmatic Play slot that’s among the best African safari-themed slots as it comes equipped with superb graphics, raining Wilds on all reels and expandable Wilds on the middle row.

Similarly to Queen of Gold, Hot Safari slot features the special 6th reel which can get you up to 10x multiplier on every win. The game has good payout but high variance, and the maximum possible win in one spin is 100,000 coins.

This is one of those games which have the base game that’s interesting enough, and the win multiplier deserves the credit. On every spin, the sixth reel will land on a different multiplier, from 1x to 10x. There is an additional option that can land on the sixth reel, and that’s Super Wild, which will trigger raining Wilds on all reels.

On top of this, all Wilds that end in the middle of the three rows will expand to fill the entire reel. If this should happen on all five reels you’ll win 10,000 coins, and if at the same time you land the 10x multiplier you’ll win the 100,000 coin jackpot! 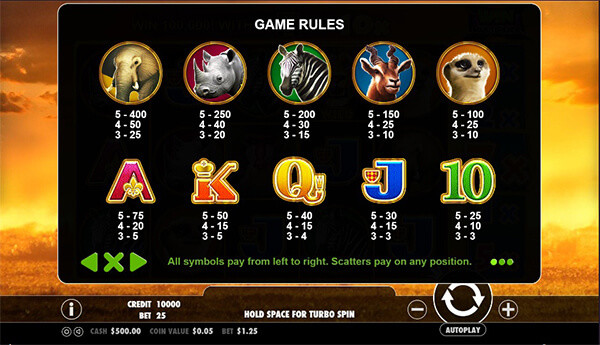 Three or more Baboon Scatter symbols will trigger free spins. You’ll get 10 free spins which can be retriggered. They’re just free spins, with nothing special added. With the high variance nature of this game that offers few wins, it’s perfectly possible to leave the free spins game without any significant win.

This is a serious downside of Hot Safari, but at least there are three more bonus features that can be triggered in the base game as well as in the free spins game – 10x multiplier, raining Wilds and expanding Wilds. That’s where the big wins are.

There are a total of ten symbols in the game, five high-paying ones and five card symbols which don’t pay much. In this safari themed slot you’ll see Elephant, Rhino, Zebra, Gazelle and Meerkat on your reels, depicting African wildlife. There is also a Lion, which is the Wild symbol, while Baboon is the Scatter.

All animal symbols are nicely drawn, but the rest of the game doesn’t follow and fails to bring life to this African theme.

Hot Safari slot has a very decent theoretical return to player (RTP) of 96.17%, which is better than most slots, yet not good enough to make it a really high-paying slot. But Hot Safari is definitely among the best African themed slots regarding payout. The game has medium variance at least, probably even high variance, as wins aren’t that common – especially big ones – and the multiplier dictates your chances of winning big.