Hotter Than Hot slot is an Ainsworth title with an Egyptian theme, though you’d never tell from the title. Ancient Egypt slot games are extremely popular, just to mention Cleopatra , Cleopatra Plus and Queen of the Nile, and this is actually one of the better ones.

Great title by Australian developer which was recently acquired by Novomatic. While the game, in theory, doesn’t have a good payout, in practice it’s a feature-rich and very rewarding slot game with a free spins feature and four non-progressive jackpots, of which the smallest one gets awarded quite frequently. To add to this, graphics are excellent for a classic slot.

The game is part of Ainsworth progressive slots series four non-progressive jackpots: Major, Maxi, Minor and Mini and their respective sizes will depend directly on the size of the bet. In the case of a maximum possible bet per spin, which is incredible €3000, the Major Jackpot will be €1,000,000. With a more reasonable bet of €30 per spin, the Major Jackpot will be €10,000 while Maxi will be €2,500, Minor €1,000 and Mini €500.

Jackpots are won when you land five-of-a-kind on your reels and also get the Crown symbol on the sixth reel. The two smaller bonuses can be won during the free spins game, and in that case, the chance of winning one of the Jackpots increases greatly as the entire fifth reel is Wild. 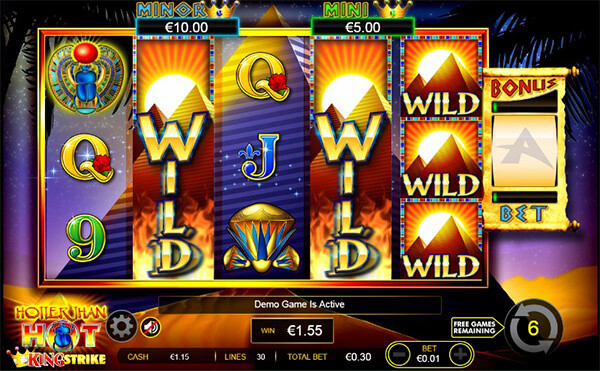 There’s also a free spins game in Hotter Than Hot, and it’s triggered when you get three Beetles, which are Scatter symbols. You’ll get 10 free spins. The entire fifth reel is Wild throughout the free spins game, and when a Wild appears anywhere on reels 2 or 4, that entire reel will be populated by Wilds for that spin.

The base game is interesting enough – you can win a Jackpot in it! You just need five-of-a-kind and that Crown symbol, and often Wilds will help in forming this winning combination. Also, during the base game, you wait for three Scatters which trigger those 10 free spins. The standard wins are improved by the frequent occurrence of Wilds on your reels, including the fifth reel where Wilds are stacked so they can form some nice wins.

Ainsworth don’t do things much differently than Aristocrat but one area in which they’re a great improvement is graphics. This is evident in Hotter Than Hot as all those Egyptian symbols – five of them plus six card symbols and two special symbols – are meticulously drawn in high-definition. Graphics of this game are just excellent, and there are some animations, too.

It’s obvious this is one rewarding slot game with cool bonus features and non-progressive jackpots which you can actually win. The Mini Jackpot, at least. Ainsworth managed to keep the theoretical return to player (RTP) as low as 94.40%, and yet the game doesn’t feel so poor at all. The overall feel of the game is that it pays well and keeps the player engaged with small and big wins and bonus features. Hotter Than Hot found the right balance, it’s one good slot game.