Lucky Dragons is a Pragmatic Play slot take on the popular Chinese theme with all the usual golden symbols we’ve seen in the classic 50 Dragons, China Mystery and so on.

Lucky Dragons pays well in the base game and this is due to the fact that Dragons – the most valuable symbol – are the only stacked symbol. It’s through these stacks of Dragons that you’ll be making money, hence the name of the slot. The game has 50 compulsory paylines and your bet can range from $0.50 to $250.

There are six main symbols in the game and four card symbols which don’t pay much. Dragon, Bird, Tiger, Crocodile, Fish and Toad are all traditional symbols in Chinese culture and all are golden. Their graphical design isn’t bad though there’s better artwork in some other slots of the same genre. Most other similar games are just too loud, too golden and too red, and this one isn’t – the theme is pleasant and it works well. The coin is the Wild symbol, and Buddha appears only on reels 2, 3 and 4 and will bring you free spins if you land three of them. 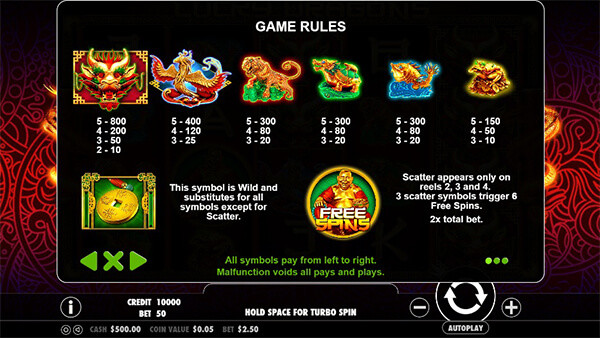 Dragon is the only stacked symbol, which is very significant as it’s the most valuable symbol and it has potential to bring you a huge win if you land several stacks on your reels. This is the main feature of the game, and most of the time you’ll be looking for that big stack of Dragons, ignoring other symbols. They can reward you with the mega win you’re waiting for. Reels will also shiver a bit when there’s a chance of landing a big Dragon win.

During the free spins game, before every spin a Wild is added to the reels 2, 3 and 4, progressively increasing the chance that you’ll land a Wild on that spin. Those Wilds remain on the reel strips for the duration of the free spins feature. Every time you land Scatter, you’ll earn one extra free spinץ

The theoretical return to player (RTP) of Lucky Dragons slot machine is 95.19%, good enough for some classic slot, and a bit skinny for an online video slot machine for a wider audience, though it must be said that the majority of this RTP is present in the base game and not hidden behind some bonus feature that’s difficult to trigger.

So it’s medium-paying slot game despite the seemingly low payout, and the goal of the game is to put those stacks of Dragons together and land a huge win. The game doesn’t explicitly say so, but with a full reel set of Dragons you’d make 800x your bet or 40,000 coins. This is a serious jackpot and it can be won in the base game, without the need to trigger free spins.