Ming Warrior is a slot game by Australian casino games developer Ainsworth, and if you look at it as if it’s a classic slot game then it has nice graphics and it gives the player the usual prize – 10 free spins when you land three Scatters. The game doesn’t pay too well but it has low variance so you can play for a while and still keep your balance around the same level. The game has an interesting theme based on Ancient China, and it doesn’t look bad at all.

There are 20 compulsory paylines in Ming Warrior and choosing your bet is simple as you only get to choose how much do you want to bet per line. Bet per spin can range from €0.20 to whopping €2000 per spin, which even millionaires might find a bit steep.

Warrior is the Wild symbol and it substitutes for all symbols except for Scatter. The coin is Scatter, and if you get three or more on your reels you’ll trigger 10 free spins with Wild being a multiplier, either 2x or 8x. It depends on your luck, you’ll either trigger one or the other. 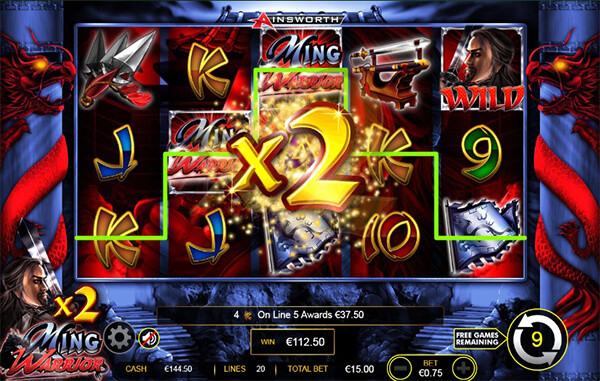 There are ten other symbols in the game, six of which are card symbols, and only one symbol – Horse – pays significantly more than the others. The other nine are pretty much in the same ballpark when it comes to pays. Scatter also pays, twice as much as the Horse does.

Graphics are decent enough and suit this game and its theme. The Wild and the Scatter are nicely animated, while the other symbols are animated – poorly. Ming Warrior has basic graphics, just good enough to be published in a slot game title, and just good enough for classic slot game players.

Base game in Ming Warriors has one purpose only, and that’s to get those three Scatters and enter the free spins game. The base game actually pays quite well, though due to strange paylines and lack of animations you never really get the feel for the size of the win – you got to check the number below the reels to know how much you’ve won.

Ming Warrior has a theoretical return to player (RTP) only 93.88%, which is common for Ainsworth slots as they rarely pay much more than this. This kind of payout is at the bottom level of playability for an online slot game. (here you can find some games with higher payouts). Since the game also lacks the second bonus feature, or anything else other than the free spins game, most players will feel a lot is missing here. In the free spins game it’s possible to win a nice amount and the base game has low variance, so many players still might enjoy this slot game and hope to get that 8x multiplier during free spins.