Developed by WagerWorks, an IGT company, this 5-reel 9-payline slot is likely to appeal to anyone who’s spent hours sitting at Monopoly board game, rolling the dice and trying to stay out of jail while laying their hands on the most profitable real estates available. Even though Monopoly Slot comes with pretty basic graphics and sound effects, you will be attracted by high potential payouts of the base game, special features offering chances of free spins and multipliers, as well as total bet based awards.

Monopoly slots are one of the most popular game series, maybe on the same level as Quick Hits. So it’s not surprise that there are plenty versions to be found online. Monopoly Once Around Deluxe, Hot Shot, Bring the House Down,  Party Train and many others. When it comes to loosest slots, Monopoly Big Event is by far the best option with up to 99% return.

You get to play up to 9 paylines and choose your line bet of as much as $50, allowing you a maximum total bet per spin of $450.

Your highest paying base game symbol is the Monopoly icon, paying 12,500x line bet for five-of-a-kind. Other symbols include different Monopoly property cards and banknotes, classic slot fruit icons and a few others.

Uncle Pennybags is your Wild and will substitute for all other symbols except Bonus and Instant Bonus icons. Getting 5 of them on a payline wins you a nice 12,500x your line bet.

Even if no symbols officially carry Scatters name, there are two icons which pretty much do the job by allowing access to special features.

Getting 3 Bonus dice icons on a payline will activate Pass ‘Go’ Bonus. Starting with a base award of 10, clicking on a dice will reveal number of rolls you get to do, moving on the Monopoly board and collecting awards. 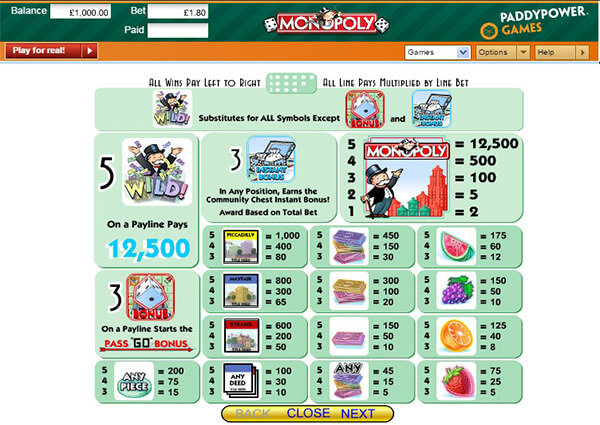 If you should happen to end up in jail, Get Out Of Jail Bonus will launch, giving you 3 chances to roll and doubling your wins. Land on Free Parking and collect a random award, while finding yourself on Go field will earn you an x2 multiplier. Passing Go once doubles your win, and if you do it twice or more, your wins get tripled.

Landing 3 Instant Bonus chests in any position earns you Community Chest Instant Bonus, paying an award based on the total bet. You’ll be asked to pick a chest and reveal a multiplier of your total bet amount.

While no feast for eyes or ears, there is an emotional appeal of a known and loved childhood game. We can’t claim to have experienced many major highs, apart from when Pass ‘Go’ Bonus got activated, and while overall it’s not a bad little piece we’d sooner point you in the direction of other Monopoly-inspired IGT slots, coming with higher quality graphics and containing features such as progressive levels concept, tumbling reels, jackpots and a few more.