Mustang Money is the online version of the Ainsworth’s land-based slot released in 2014. It’s a standard classic slot game where you hope to land three Scatters in order to enter the free spins game, and the wilds get 2x or 5x multipliers on your wins if you’re lucky. The game became very popular in land based casinos, so Ainstworth decided to launch Mustang Money slot online.

The game features 100 non-compulsory paylines so you can choose how many you want to bet on, from 1 to 100. Minimum bet per line is €0.01 so that is also the minimum bet per spin, great for those looking for online penny slots, and the minimum to cover all paylines is €1. The maximum bet allowed in Mustang Money is whopping €10,000. If you want’ to bet a house on a slot game spin, Ainsworth won’t stop you.

Everything in Mustang Money is about sunset and horses, so the entire theme is in shades of red. It’s a bit too red, but the main symbol, Mustang, is impressive and it dominates the reels. As usual in Ainsworth games, there are six card symbols, with the usual artwork. There are five symbols which are more valuable, plus Scatter and Wild. Rare in Ainsworth slots, but Wild doesn’t pay, only Scatter does and Scatter is also the highest-paying symbol. Overall, the theme isn’t that good, but notably, the controls of the slot game are more modern compared to earlier Ainsworth titles, and the big Spin button is adapted to mobile tapping. 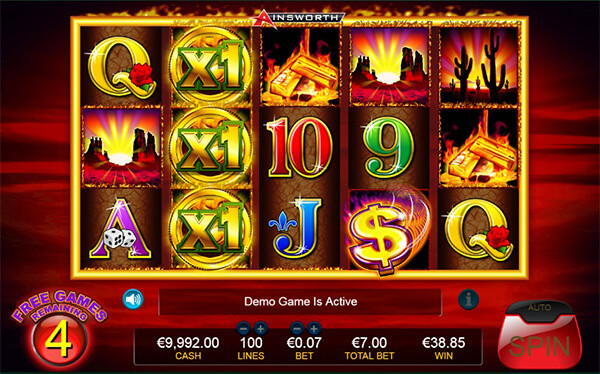