New Tales of Egypt is a 3×5 Pragmatic Play online slot with an ancient Egypt theme that involves all the usual Egyptian symbols and a free spins game with a special Scatter symbol. Basically, New Tales of Egypt slot is Pragmatic’s take on the classic Cleopatra, Book of Ra, etc…

This is, in essence, a classic slot game despite the good graphics, and it plays like one. The base game pays well and the free spins feature is nothing special, so it’s not for players who expect a huge payout from the bonus feature, as the game offers no quality bonus features.

Considering that this is solely an online slot machine, the RTP of the game is quite outrageous. Just 91.93%. That’s one of the lowest we’ve seen, for sure for a flat top slot. You can check for our list of best payout slot machines to see the games on the other side of the scale.

There are only four main symbols in New Tales of Egypt that carry the theme. The rest are represented as card icons, however they don’t pay that little in comparison to custom ones. In some slot games, more symbols would have been properly designed, but this one seems to be aimed at the audience which prefers majority of the symbols looking insignificant, to make the important ones stand out.

Diamond is the Wild symbol, and not only that it does stand out but it feels out of place in the Egyptian-themed slot. 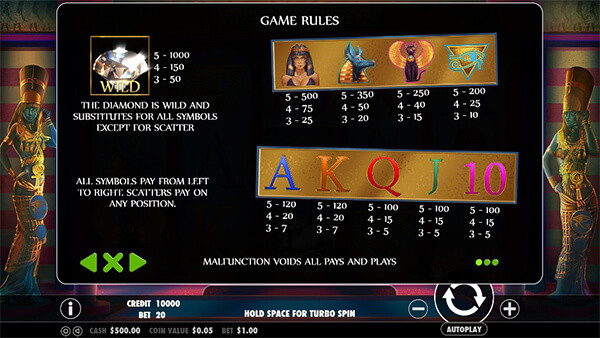 An interesting feature of New Tales of Egypt is that, during each spin, the symbols that can no longer form a winning payline are faded, so only the ones that can actually stand out. Also, the spin will end really quickly if there’s no hope of a win, and there will be a delay when you need a certain symbol on your fourth or fifth reel. This makes this fast-paced slot easy to play. Since the base game pays well which gives importance to every spin, the whole base game playing experience is very good.

The Great Pyramid is both Scatter and Wild, and it can trigger the free spins round when three are found on the reels. At the same time, it substitutes for all other symbols. It will initially display as Scatter, and if it can form a winning combination then it will say Wild instead.

The free spins game is a bit ordinary. It awards 10 free spins only, with a randomly chosen second Scatter symbol that will pay whenever it’s found on the reels. The free spins game doesn’t really have big potential of paying much better than the base game, it’s just that the spins are free. Quite unfortunate since the original Cleopatra and Queen of the Nile are the ones that introduced the free spins bonus feature.

New Tales of Egypt features the theoretical return to player (RTP) that’s among the worst among all slot games, particularly other Pragmatic Play slots that have a tendency to pay well. RTP is only 91.93% here, raising doubts over whether this game should even be played or not, though in the short run this game is capable of paying well. In the long run, it most certainly will not, as the low RTP will prevent it from doing so. This slot game is difficult to beat and is only for the most experienced classic slot game players.