The NextGen-powered Hot Hot Volcano slot takes you on an exotic, adrenaline-fueled journey to a paradise-like island. Inhabited by all kinds of peculiar animals and brightly colored fruits that contribute to a highly immersive gaming experience.

The 5-reel 25-payline slot machine some attractive features and symbols such as eruptive volcano Wilds, which can assume the role of Scatters, according to the needs. You will be surprised to notice that lizards are a very welcome sight in the vibrant oasis, as five of them on a single payline will award the top prize, so you may as well hit it off with them in the end!

The visuals of Hot Hot Volcano revolve around a tropical paradise with volcano smoke pouring all around while the sun sinks down in the evening sky. The weather theme itself is far from being revolutionary, given that we had a chance to see a number of suchlike games, but it is still appealing to the eye and brings a nice dose of fun.

The symbols populating the reels include various animals such as lizards, which are the most generous ones, followed by monkeys, colorful birds, and dinosaurs that all match the exotic subject in question. Wilds are represented by an erupting volcano and are also key to triggering the most profitable feature as well. Overall, we are presented with a rich offering, slightly reminiscent of the Jurassic Park island.

The erupting volcano graphic acts as Wild symbol, which can only pop up on the second, third, and fourth reel. If you are fortunate enough to cover all these reels with Wilds on the same spin, you will activate the amazing Eruption feature and that is exactly when you will grab the heftiest of prizes.

The volcano will spread to cover an entire middle reel and you will consequently be awarded five free games, whereas the augmented Wild will be stuck in its position until all 5 re-spins come to an end. 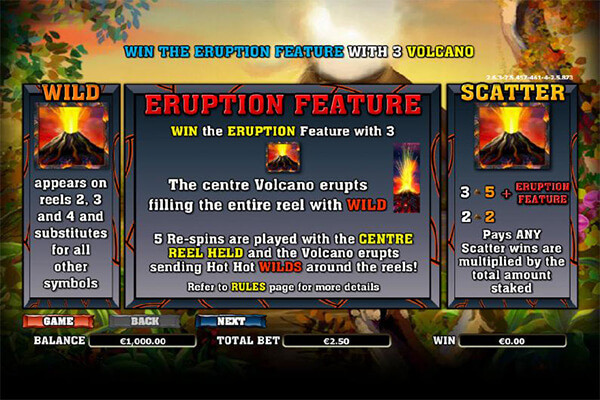 In addition, you will see the volcano erupt, dispersing extra Wild symbols across the reels to boost your winning power further. Hot Hot Volcano slot machine also boasts the Gamble feature, which can come in handy for those enjoying the risky playing.

Hitting the Gamble button will start the game in which you are required to make a correct guess regarding the color of the next card that is drawn to win a 2x multiplier for your wins. On the other hand, the correct card suit will multiply your balance by 4. You can continue multiplying your balance up to five times, provided you have successive wins, of course.

It could hardly be said that the slot machine can bag you a life-changing sum, given that the top prize equals 500 coins, which basically translates to a rather modest amount of $1,000. However, the NextGen title is a highly volatile game and not for fainthearted. You should either start with lower bets or if you’re looking for a smoother ride, you can try slots like Starburst or some new Mirogaming slots.

The theoretical return to player (RTP) is 95.41%, which is relatively decent for less aspiring players, or those entering the adventure more for the sake of entertainment. Those looking for higher value for money, should opt for higher paying slot machines.