We’ll admit, we’re suckers for a good fantasy story. After you’ve gone through a long day of complicated real-life dealings, it’s nice to escape to a world where the good guys are good, the bad guys are bad, and you’re distracted with knights, magic and various exotic beasts well enough to suspend your disbelief that such a place could possibly exist.

Ogre Empire slot, a take off on the popular Shrek sequel, look pretty cool and especially like the transition between the day and night cycle. The newly launched slot takes place on a 5×3 playing field and has several special features to entice players into spending more time with the game. During the day, you have blooming Wilds, and ogre smashes, which means that the ogre will break stone symbols. During night time, several unique symbols appear, and you have a different flavor of blooming Wilds as well.

You can check our full review below, but we will jump ahead and say that the bad part of Ogre Empire is the RTP, which sits at 95.22%. That might be ok for landbased casino behemoths such as IGT or WMS, but for online slots provider that’s just too low. There are BetSoft slots with RTP almost  3% higher, like At the Copa and Good Girl Bad Girl slots.

Why to play Ogre Empire

You have a few bonuses to look forward to in Ogre Empire.

When a full reel day or night symbol appears on the third reel, the time of day switches, and with it, the bonuses you have available to you. During daytime, you have access to the Ogre Smash, which destroys all stone symbols in a fit of anger, allowing new icons to fall into place. Both during daytime and night-time, you have access to Wild flower blooming, which creates three additional Wilds. During night-time, stone symbols are replaced with the King, Queen and Joker, which pay a whole lot more than they usually do. 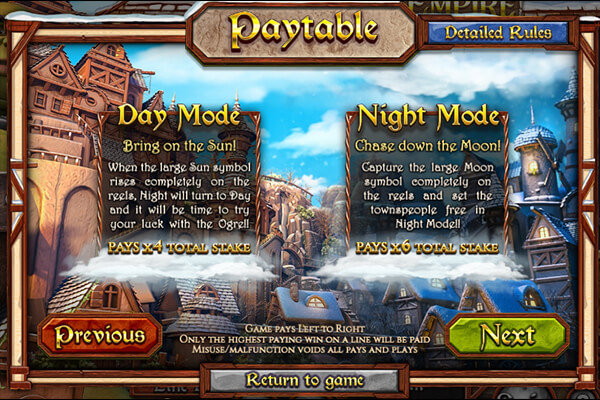 We’ve quite grown to fancy this Betsoft release, we have to admit. The ogre may not move around a lot, but he’s very helpful with that club of his in a pinch, and both visuals and gameplay were rather enjoyable. The only thing we can complain about is the absence of information regarding the game’s volatility.