Become one with the Orient and join the Sun Dragon in one of the latest Quick Hit slots from Bally! Quick Hit Ultra Pays Sun Dragon is a Chinese-themed online slot game with terrific visuals and loads of features that will draw you inside a world of tradition and myth. In case you haven’t noticed, dragons are all over the place in China, from legends and festivals to astrology, art and even names. They are never seen as dangerous and evil, but always benevolent and a source of good fortune.

Arguably, the Sun Dragon refers to the fun story of a dragon that’s eating the sun (which is seen as the solar eclipse). By making a lot of noise, the people are supposed to scare away the creature from eating the sun. We see the mighty dragon on the side of the reels in Quick Hit Ultra Pays Sun Dragon, and the reels against a blood red curtain. The slot is played on a 5-reel engine with 243 ways to win, but that can randomly change and result in up to 7,776 ways to win.

Quick Hit Ultra Pays Sun Dragon online slot has a Wild symbol and a pair of Scatters, and these special symbols are on the job of increasing the win potential and the dynamics of the game.

This is the main slot feature; it’s triggered by landing the Scatter, the scroll, on the 3 middle reels on the same spin. This awards 8 freebies and a picking game. The player needs to pick from 30 types of fireworks and firecrackers to determine how many ways to win will be in play. As we’ve mentioned before, the range goes from 556 up to 7,776. The feature can be triggered again with 3 additional Scatters. 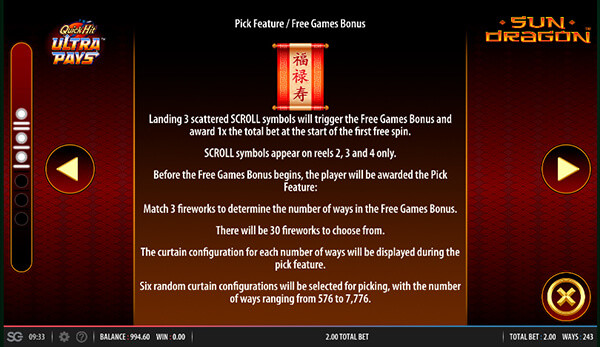 The Quick Hit symbol is the other Scatter and it has the power to award exceptional scattered wins or activate one of the five jackpots. Three or four of them anywhere on the reels will result in a direct cash prize worth 10x or 40x your total bet. Landing 5 to 9 of these symbols will pay 100x to 1,500x your total stake. To win any of the progressive jackpot pots, you need to play at maximum bet.

Bally’s Quick Hit Ultra Pays Sun Dragon slot game is available on desktop and mobile and it is certainly worth investigating provided that you are a fan of slots with an unmistakable Chinese theme. Otherwise, there may be other better slots on the market for you. Bally’s Quick Hit series contains Quick Hit Las Vegas for instance, which is the western ideal for all gambling enthusiasts.