Betsoft may not have as much experience under its belt as some industry veterans (RTG & Rival in US or Microgaming and Playtech globally), but it’s always put itself at the forefront, trying to compete with the best with mixed results. Clearly, it had high aspirations, as it even laid claim to royalty with this release back in 2011.

Coming back to Royal Reels slot, we’re surprised at how well it held up. Naturally, the graphics aren’t as impressive as they used to be, but keeping things relatively humble allowed them to age well. There are no awkward humans that cause the feeling of uncanny valley or animations that try too hard but turn out choppy. The gameplay is also likely to feel very familiar to anyone who’s ever played a slot before – while there are no free spins, there’s a lot of collecting going on, all in the name of shameless profit.

The game offers medium volatility with an RTP of 95.5%, which sits about average for online video slots nowadays. Betsoft itself has much looser slots, such as Good Girl Bad Girl and At the Copa.

Unfortunately, Royal Reels no longer available in Free mode, but we’ve placed here another one of our BetSoft favorites.

Why to play Royal Reels

There are two of them in total, but they’re so similar, we’re just going to cover them together. 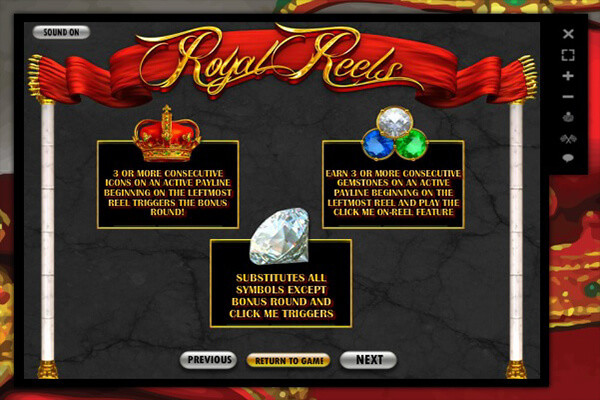 Landing three gemstones, emerald or sapphire, will highlight those three symbols. Picking one of the three rewards a cash prize for the player. The second bonus does the same thing, only this time, it’s crowns instead of gemstones, and there are five crowns instead of three.

It feels a lot smoother than some other older titles we’ve reviewed recently. It doesn’t really do anything amazing, but it does what it sets out to do really well, and knowing where to limit its ambition allowed it to age well and be fun to play even nowadays.