We enjoyed the original Bubble Bubble slot at the time. Can’t say it’s our favorite RTG slot machine, but we indeed come back to it from time to time. Naturally, we were excited to find out that RTG now launched its sequel, Bubble Bubble 2 slot machine. Join the duo of witches in their dastardly deeds – just in time, as Halloween slowly looms closer and closer.

The animations are all cool looking, striking a nice blend of cheeky humor and slight creepiness that seems to fill the backdrop. The title is played on a 5×3 playing field with 50 fixed paylines, and you have three different special features to look forward to that are activated by Scatters, not to mention the two witches, Winni and Wanda, that can appear on the first and fifth reel and replace symbols, while adding multipliers to them.

This is a high variance title, meaning players will have to spend a bit of time getting to any prominent wins, but by extent, they can expect to be rewarded with awesome wins.

Why to play Bubble Bubble 2

There are three special features activated by collecting three or more Scatters from left to right. Which one you get is determined by which of the three wands you draw at the start of the feature. 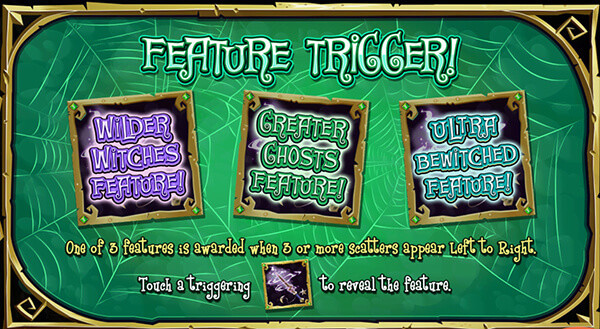 You are rewarded with 20 free spins, and during each extra turn, up to 9 Ghost Wilds can appear and position themselves somewhere on the reels. This feature can be retriggered.

Nine free spins are awarded, during which Wild Witches will cast spells at adjacent reels if they appear, which creates another witch Wild in that place. That Wild can then cast a spell on the middle reel to turn it Wild, as well, or it can reward you with extra 33 free spins instead. And the best part? It can technically do both at the same time if you’re lucky enough. The feature can be retriggered. If the win is 10x the wager or less, Win-Win rewards a random prize between 5x to 100x as a consolation prize.

You are rewarded with seven free spins, during which Wild Witches will appear on the first or fifth reel, or both at once. This feature can be retriggered.

We’ll admit, we were quite smitten by this RTG release. It has fun visuals, awesome special features – it was really enjoyable to pay, and we may have had our opinion affected by a few juicy wins here and there. That said, we’d still warrant caution playing it, as we don’t know the RTP of Bubble Bubble 2.