A 2010 Christmas-themed edition, Rudolph’s Revenge was released in February, nearly 3 months after all the holiday fuss was already over. This, however, did not stunt the popularity of this 50 line RTG slot. The main attraction here is the high volatility, which found the way to the players’ hearts thanks to the vibrant graphics and the progressive jackpot.

The narrative of this slot is far from conventional, and you might not enjoy the quirky theme about the vengeful reindeer – especially if you have a soft spot for the original version of the story. However, after the initial success of Rudolph’s Revenge in 2008, RTG decided to bring the titular character back for another spin, releasing the Return of the Rudolph two years later. The sequel was well received, but many remain loyal to the original, probably due to the progressive jackpot, which does not exist in the 2010 edition.

The value of a single coin is $0.04, and the maximum bet is 50 coins per payline. All symbols become payable in the combination of two, with Rudolph as the highest paying icon, generating between 15x and 5,000x the bet, depending on the number of symbols that land on the payline.

Why to Play Rudolph’s Revenge Slot 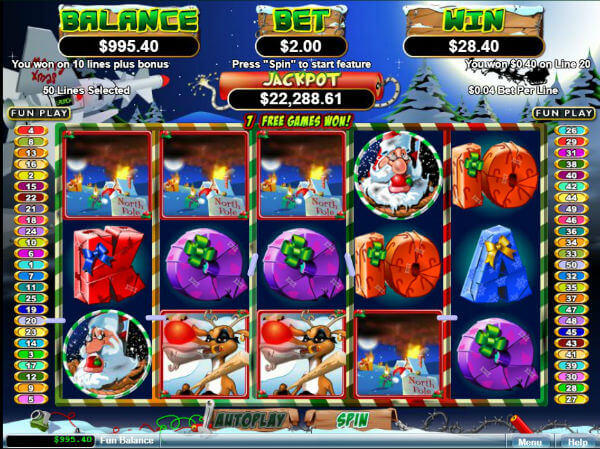 Rudolph is Wild, substituting all other symbols except for Scatter Bomb. All symbol combinations that are completed with Wild will have a higher payout value, doubling the potential winning if one or more Rudolph symbols land on a payline. Scatter and progressive jackpot wins are exempt.

Free Spins are triggered when at least 3 Scatters appear on the reels (left to right). All Free Spins winnings will be doubled and a 2x multiplier will be applied together with the Wild payout increase.

If Free Spins are activated by a string of 4 Scatters, the Bomb icon will assume the role of Wild during the bonus rounds. The same thing will happen if the feature is activated by 5 Scatters, only this time, both the Santa and Scatter Bomb will become the Wilds. More spins can be triggered while the free games are in progress.

In terms of the theme, Rudolph’s Revenge is quite unique and in line with the aesthetic concept of RTG, a company that has (and deservedly so) acquired a reputation of an innovative gaming provider.

Despite its high variance, the slot boosts the payout odds every step of the way – the winnings are doubled during Free Spins as well as every time Wild replaces a symbol, not to mention extra Wilds that can appear in free games.