Safari King slot takes us to the vast savannas of Africa. As you explore the grasslands, you will find many animals native to the continent. But you will also find vile, colourful invaders – playing card icons the sizes of elephants and lions! Silliness aside, the symbol quality on the playing field is great – at least, for the unique animal icons.

The reels look like they are made out of wood and decorated cloth, surrounded by golden fields on both sides. In the distance, gamblers can make out the occasional tree and migrating birds, but little else can be seen. The game is played on a 5-reel, 4-row grid with 50 fixed paylines. There is only one special feature: free spins with sticky Wilds that are added after every free spin.

So if you fancy a safari trip that has the chance of paying you instead of the other way around, try Pragmatic Play’s release! And if you are a Safari themed slots fan, also worth checking Hot Safari (also by Pragmatic) and BetSoft Safari Sam. If you fancy classic Fruit machines, Safari Madness might be the one for you.

Why to Play Safari King Slot?

There is only one bonus offered to gamblers in Safari King, and that are the free spins.

Collect three Scatters on the first, third and fifth reel at the same time to win eight free spins. A different set of reels are used while this bonus is active. Every time another Scatter appears on the playing field, it adds another turn to the counter. Before every spin, including the first, one Wild is added to the second, third, fourth and fifth reel. These Wilds are sticky and remain on the reels until the bonus ends. 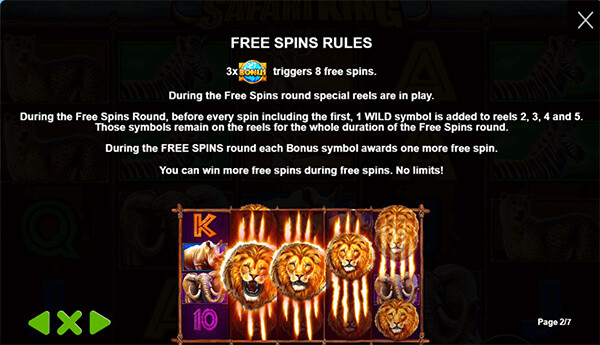 This slot showed us that less can be more sometimes. Despite having only one special feature, Safari King was very enjoyable, a very rare feat for most developers. While we do wish there was more to do in the game, it does not impact the fun we had playing this recently launched online slot. If the review sounded interesting to you, try the title out. You will not be disappointed.