Sheik Yer Money is a 5-reel slot with 10 fixed paylines developed by Barcrest. Playable across all devices, the 2016 release is themed after Arabia and the oil sheiks. Gamers can benefit from mystery symbols, sticky Wilds, and also from the Sheik Shake feature, where the oil sheik himself plays with the reels and rewards gamers with decent payouts. If you are prepared for a trip down to the oil fields of Arabia, then you should definitely join us.

Thanks to it’s Big Bets mode, Sheik Yer Money slot is one of the highest paying casino games online, with RTP of 98.2%!!! It reminds the feature you might’ve seen in Monopoly Big Event, although in Monopoly you have a bit more options and the RTP is higher, 99%!

Who is it for?

Players who like fun slots with high return will certainly know to appreciate the Barcrest title. Gameplay is as easy as pie, just choose your bet and start spinning the reels. High rollers will be more than satisfied with the Big Bet options. Of course, penny punters will also have something to play with in the Big Bet. This sheik made sure that Sheik Yer Money slot is affordable for a wide range of gamers. Also, punters who like Arabian music are more than welcome to try out the game.

Why is it so good?

The catchy soundtrack is the first good thing players will notice about the 2016 release. We really enjoyed testing the Barcrest title, because we also had the chance to wiggle our behinds to the sounds of Arabian music.

The Sheik himself proved to be quite helpful with his Sheik Shake feature. We really don’t know if the real sheiks are so generous, but this Barcrest sheik came out quite often and played with the reels so as to mix up some decent winning combination. 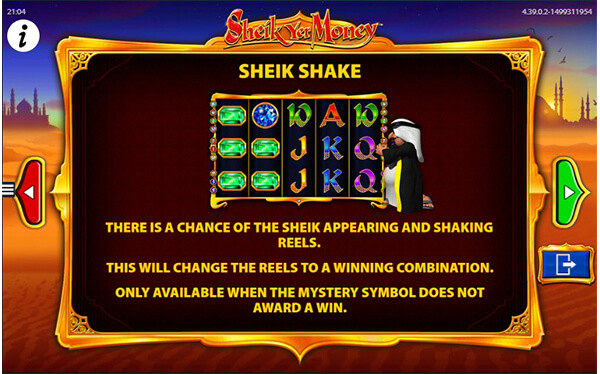 The Mystic Lamp is a useful addition to the story, due to the fact that it can change and reveal a mystery symbol that just might fit and help gamers form a winning combination.

Check out the Big Bet mode, since it comes with 5 linked spins, lots of Mystery Lamps that remain locked in their positions, and it can even bring you some locked Wilds, depending on how big your bet is. The mode has four different options. The lowest option offers only the Mystery Lamp that locks in place when it appears on the reels. The next Big Bet option includes Wild symbols as well. The third option comes with locked Mystery Lamps and locked Wilds, while the fourth option has everything we mentioned in the previous options, while only high-value symbols appear on the reels.

Also, there are no Wilds in the base game, which is pretty disappointing. The Wild symbols appear only in the Big Bet mode, and we have to say that they don’t appear that often even when you bet really big.

There will be times when the Mystery Lamp symbol tends to reveal mystery symbols which do not help gamers create winning combinations, and this can prove to be very frustrating, especially if it happens for a longer period of time.

Taking everything into consideration, the Barcrest title is a pretty decent slot. Sheik Yer Money slot machine houses crisp graphics and a catchy soundtrack. The wide betting range will definitely attract both penny punters and high rollers. However, we don’t expect plenty of action-junkies in this Arabian adventure, because there aren’t plenty of additional features on the offer. Even so, the 2016 release can prove to be a very rewarding game, since spinners can expect