Thunder Cash is a classic slot game and is a true Ainsworth Game Technology product with one bonus feature, low payout, high variance and nothing extra on top. The game has a free spins feature with 8 free spins during which the paytable is almost halved to compensate from increased wins because of held Wilds.

There are 20 compulsory paylines so with a €0.01 minimum bet per line, the minimum bet per spin is €0.20. The maximum is €2,000, though any player betting that much would need a monster bankroll to go the distance in this game.

There is only one bonus feature, the free spins game. Whenever you land at least three Scatters on your reels, you’ll get 8 free spins. During the free spins feature, whenever the Lightning Bolts symbol appears on the reels, it will remain locked in its position until the end of the feature. These are so called sticky wilds, like the ones you can find on the extremely popular Dead or Alive slot, Aristocrat’s More Chilli and others.

The free spins game can be re-triggered, though you’ll only get 5 extra spins for three Scatters. 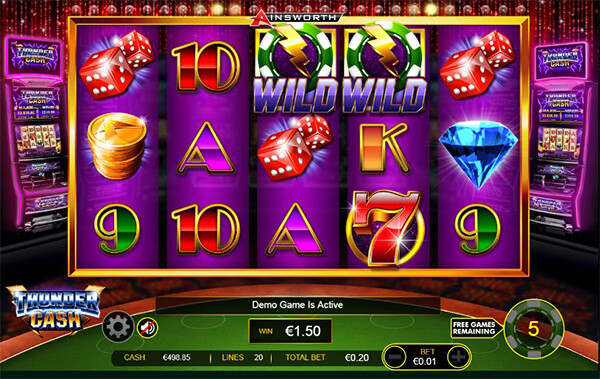 During the free spins game, the Feature Paytable is applied, the really skinny version of the Normal Paytable. However, the held Wilds have the potential to really give you a big win by the time you get near your free spins session, when the Wilds – hopefully – accumulate on your reels.

Thunder Cash has a strange theme that combines many different themes. It has thunder, it’s actually a cash-themed game, in a casino setting, and has the 7 symbol and some other casino-themed symbols. The Wild, for some reason, has thunder on it. Graphics are crisp enough and look nice, and the theme will probably appeal to players who enjoy cash-themed slot games, though this one underdelivers as it doesn’t have any sort of non-progressive or progressive jackpot. It’s just a classic slot game with a free spins feature and a paytable which can make you rich if you happen to have a large bet on that spin which brought you five-of-a-kind.

The theoretical return to player (RTP) of Thunder Cash is 94.07%, which is a bit low but in sync with Ainsworth’s standards and the expectations of a land-based slots player, Ainsworth is catering to. The game doesn’t pay often and doesn’t pay well, and the only chance for the player to make money on Thunder Cash is to trigger the free spins game early and often. Some players are actually looking for this high-variance no-frills playing experience, and they’ll be fine with Thunder Cash. There are definitely good sides of Thunder Cash slot game, but it will take a more experienced gambler to see the value of Thunder Cash.