Long before Rome would ever conquer the known world and form its empire, another city-state held the title of strongest warriors. They were the Spartans, whose grand exploits were told time and again in many stories, both mythological and historical. And now, these soldiers of legend who held back the Persians with only 300 men are given the greatest honour of all. Their own video slot!

Two detailed warrior sculptures sit on each side of the board, separating it from the background image. Wild Spartans slot machine, which can be found in all Red Tiger casinos, is played on a 5-reel, 3-row playing field with 10 fixed paylines. Available special features include free spins, sticky Wilds, and Titans.

If you think you have what it takes to stand among the best sons of Sparta, we won’t stop you! But make sure to give it everything you’ve got, or this release will mercilessly destroy your wallet!

Why to play Wild Spartans Slot

There are several special features active, but none of them is overly complicated. That makes them easy to put together and use – which was likely Red Tiger’s intent. 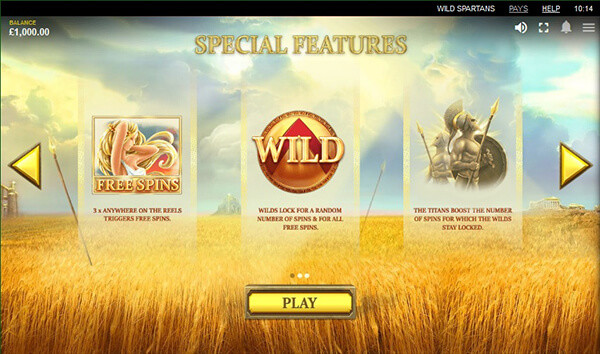 Collect three or more blonde girl Scatters from any position to win free spins. You don’t get an exact number upon activation. Instead, there’s a bit of randomness to it, depending on how the Spartan soldiers are feeling.

Both during normal gameplay and free spins, you will often come across sticky Wilds. This release is even nice enough to give you an indicator of how many spins these Wilds will remain in place for!

There’s a chance the two Titan statues on each side wake up to boost the number of spins for which the Wilds stay locked.

Is Wild Spartans slot perfect? The answer is an obvious no. Like any other slot, it has its fair share of flaws. But the fun special features, the thrilling jackpot and great graphics have won us over! We thoroughly enjoyed our time playing this game, and we would easily recommend it, despite the problems we mentioned. If you’re looking for something new to play, give this release a try.