Monopoly on the Money Slot

Monopoly on the Money slot is a Barcrest game created on the SG Interactive gaming platform. It’s played with 10 fixed paylines but is absolutely packed with special features. No wonder it’s one the most popular game of all Monopoly slot machines of all times.

Similar to Bring The House Down and Monopoly Big Event, players are offered to choose between a Standard and Big Bet game, the latter consisting of 5 linked spins and requiring an additional investment.

Symbols pay twice as much in Big Bet game than they do in the Standard one, and investing a little bit more also gets you a range of other advantages. The elusive Mr. Monopoly will only show up once you launch free games but he’s determined to make it count.

Free Monopoly on the Money Slot

Whether you choose to play Standard game or invest a bit more to harvest Big Bet game advantages, there’ll be special features to enjoy. Free games play with multipliers and the number one initially wins can easily be increased if the player is brave enough to do a bit of gambling.

You’ll need to simultaneously land 3 or more Scatters in order to launch free games. Depending on the number of triggering icons, reels will spin 10, 15 or 20 times without asking for an additional investment. This is when Mr. Monopoly finally makes an appearance along with cash multipliers, acting as a Wild icon willing to replace any of the other game symbols. 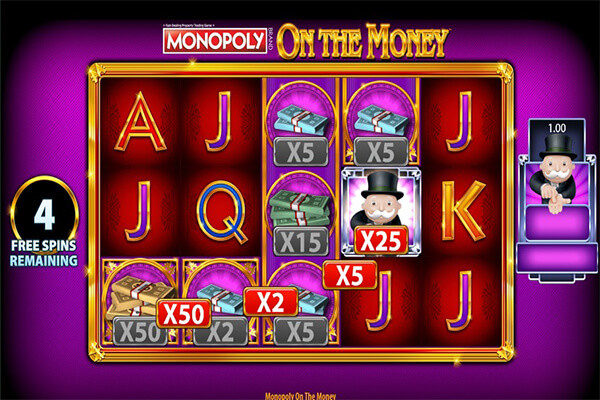 If joined by at least one of his twins on the same payline, the iconic figure will award an additional prize by collecting all multipliers in view and forcing them to make an instant contribution to your bottom line. Before free games begin, you’ll be presented with an option to gamble and potentially win more spins on the house – up to 25 at best.

To play a Big Bet game, one can choose to invest 20, 30, 40 or 50 credits per spin. The minimum amount makes Scatters act Wild and has them stick around until the end of Big Bet Spins. Wagering 30 credits activates Red Hot Respin and the Chance Card bonus. Bet 10 credits more to introduce House Extensions, or a maximum of 50 to enable Hotel Extensions.

If Red Hot Respin is active and Big Bet game ends with 2 Scatters on reels, they will both remain fixed while other positions spin one more time. If this re-spin results in a third Scatter symbol joining the existing duo, you’ll trigger the free games round.

Chance Card Bonus is awarded once free games play out. The player is offered 8 cards to pick from and win additional free spins or a cash reward. Pick the wrong card and the feature ends.

House and Hotel Extensions are available both during the base games and while spinning for free. The first adds one additional row on top of the standard reel area, and the other two. Scatters landing in the extended area in base game stick around until 5 linked spins play out, while Mr. Monopoly and cash multipliers appearing on added rows deliver a payout.

If you like Monopoly and video slots bursting with features, Monopoly on the Money may be your ideal game. It looks simple to start with, but don’t let appearances fool you. There’s plenty of action to keep you on your toes and more than a few ways to collect hefty rewards. The game features an exceptionally wide bet range which makes it accessible and appealing no matter how much cash you’ve got available.

Monopoly on the Money Slot was last modified: February 24th, 2021 by Mark Cesley