BetSoft has created “a royal delight” inspired by (what a surprise!) the Chinese mythology. The Dragon, a symbol of power and good luck, is paired with the Phoenix (also known as Fenghuang), a bird that’s supposedly appearing only in places blessed with peace and prosperity. In Chinese culture, both ancient and modern, Phoenix and Dragon are often depicted on decorations used in weddings or royalty.

BetSoft has faithfully replicated the myth within its 5-reel, 20-paylines video slot which tempts players with a promise of wealth and prosperity. Two powerful mythological creatures acting as high-value icons look after the wellbeing of the royal couple which has taken the role of a substitute. Players are offered to spin reels for €0.20-€20 and potentially celebrate royal wins with the help of Extending Wilds and Free Spins.

The game is highly volatile, offers a return of 96.01% and is willing to pay up to 8,098x the total stake. Lower than what best online slots offer, but not bad at all.

Why to Play Dragon & Phoenix Slot

The Betsoft title comes with Expanding Wilds that can enhance your winning chances as well as with free spins where the gameplay becomes more rewarding.

The Wild royal couple is happy to make an appearance on all reels except for the first. When the two lovebirds show up, they’ll stretch to fill the entire reel and hopefully end up sharing a good portion of their doubtlessly massive fortune.

Scatter depicted as Money Tree pays as of 3 and is able to multiply your bet up to 500x. The same minimum number triggers the Free Spins feature. Money Trees are removed from the reels and cascades initiated to fill vacant positions. The same magic happens over and over again until no new wins are created. Each Scatter that’s taken away awards 1 free game. One can win up to 15 spins on the house but it is possible to retrigger the feature and continue playing for free. 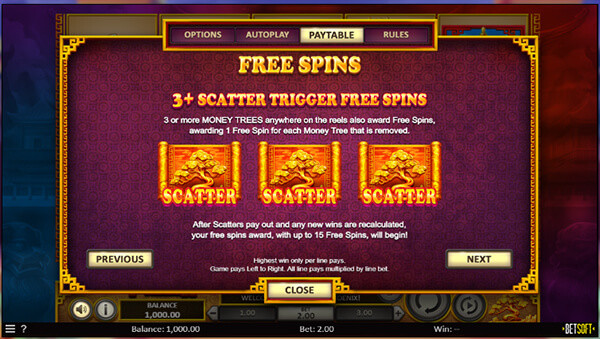 Every standard win activates the gamble feature. Players are prompted to click the Double Up button and try to guess the outcome of the coin spin. Risk-takers can gamble half of their win as many times as they wish.

Dragon & Phoenix slot machine delivers nothing we’ve not seen before. Expanding Wilds and Free Spins are old news though they may easily be among the most sought-after features (which is probably why BetSoft decided to use them). Still, knowing what the developer can do, we had much higher expectations both in terms of visual appearance and gameplay.

The max win potential of over 8,000x the bet is quite tempting; just make sure your balance lasts until you manage to score multiple full-reel Wilds in combination with one of the newlyweds.