Mahigaming and Microgaming welcomes you to traditional Shanghai, the biggest shipping and trading town in China. Here you will have the chance to get acquainted with some of the most beautiful Shanghai women, as well as to win some lucrative payouts.

Shanghai Beauty slot, a relatively new game released only in 2016, is played at five reels and three rows, offers 9 fixed paylines, a rewarding Free Spins feature and a maximum possible payout of $50,000.

Microgaming are gowing pretty wild recently with dozen of new slot machines. We would mention Emperor of the Sea, Jurassic World and Reel Spinner slots. And if you are a fan of Chinese themed slots, you should definitely give the classic China Shores and Wild Panda a try.

Two beautiful concubines will be there to keep you company, while also paying the most among regular symbols. Also, expect to come across a Golden and a Silver Crown, and a traditional Chinese Sailing Ship. Low-value symbols are represented as playing cards. The Logo is the game’s Wild and also the highest-paying symbol of the slot, offering up to $50,000 for five of a kind. A Box with coins is used as a Scatter, and at least three of them are needed for the Free Spins feature to be triggered.

Shanghai Beauty pays left to right, starting from the leftmost reel, with three of a kind being the minimum for landing payouts, except when it comes to those two beautiful concubines since they will pay even for two of a kind.  Gamers can select the desired coin denomination, which goes from $0.01 to $1, while they can also choose to place 1-5 coins per payline. The minimum wager that can be placed per spin is $0.09, while the maximum is set at $45.

The expected return is a solid 96%. Not as high as some of the best Microgaming slots, but still good value for money.

The only additional Bonus feature gamers can benefit from is the Free Spins, triggered by three or more Scatters. Once you land those green Boxes on the reels, you will be awarded 15 freebies and a cool 3x multiplier, which will apply on all your wins.  You can retrigger the feature at any time simply by landing three or more additional Scatters on the reels. 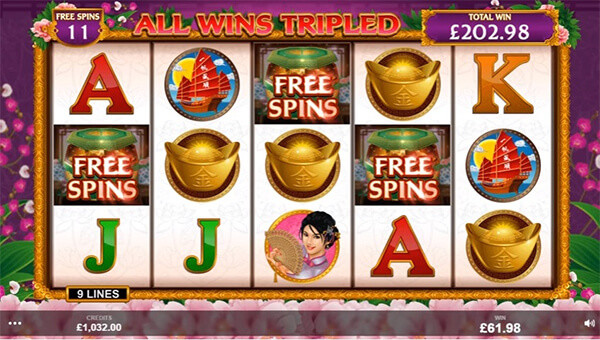 Apart from being crucial for the Free Spins feature, Scatters will also pay generously, up to 500 times the bet, provided you manage to land all five of them on the reels.

Shanghai Beauty is yet another decent slot themed after traditional China. The 2016 release boasts good graphics and a nice soundtrack and offers a single Bonus feature gamers can benefit from. Everything about the Microgaming product is pretty common, so we don’t believe that Shanghai Beauty has what it takes to stand out from the crowd. The Free Spins feature is the place where you can win some lucrative payouts thanks to the 3x multiplier applied on every win, but you will need lots of patience because the Bonus feature is not triggered that easily.