The iconic Japanese 8-bit arcade game returns to the screens, this time in the form of a 5 reel 10 payline slot designed by Playtech. The fans of the game will surely be glad to see the remake of the arcade cabinet with the buttons and the tilted screen of falling aliens waiting for you to shoot them with the cannon. Though you won’t have direct control over the cannon it will still shoot the aliens and turn them into Wilds through Invaders Turn Wild and UFO Wild feature.

This slot is of course far more simple game than the newly released skill based Space Invaders slots machine by Scientific Games, pretty much on the same level as WMS replica Invaders from Planet Moolah. Btw, here you can find a list of Best Paying Playtech slots.

Replicating the original game in every aspect Space Invaders Slot features pixelated images of aliens space ships, planets that spin on a 5×3 grid and a cannon which moves under the reels. Whenever you hit the spin button, the cannon will move one space ahead. The rest is pretty much typical. There is the option to turn on turbospin mode or autospin mode. 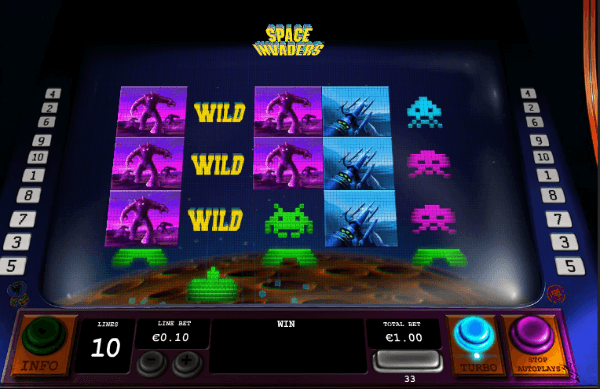 There are 10 fixed paylines which means that once you set your bet from $0.10 to $200 it will apply on all paylines. The symbols will pay in winning combinations of 3, 4 or 5 of a kind.

The cannon is your main weapon and the trigger of the special features. When it stops under reel 2 or 4 it has the power to shoot the low paying symbols (aliens) and turn them into wilds, provided they are a part of the winning combination. If that happens to be the case, the winning amount will be doubled. This feature is called Invaders Turn Wild.

The second special feature is called UFO Wild which is again activated thanks to the cannon. In this space adventure aliens are everywhere so don’t be surprised if you find one roaming above the reels. Should the cannon appear under the same reel, it will beam it with its laser and add up to 9 Wilds.

Space Invaders slot is clearly a game that targets slightly older audience, the children of the 80s who spent their time playing arcade games. The theoretical return to player is 96.1% which means that you won’t be left high and dry in space. It is definitely a fun blast from the past, and the features are good enough to keep the dynamics of both the play and your balance.