According to numerous slot developers, a stroll through a garden or a forest can prove to be quite lucrative – but only in the virtual world! NetEnt lush garden is home to generous fairies, cute little bugs and colourful flowers showing up on transparent reels. The entire symbol collection is themed so you won’t be seeing any boring royals. As much attention was given to audio; an enchanting tune, chirping of the birds and buzzing of insects accompanies every spin.

This 5-reel slot with 20 fixed bet lines has a reasonable RTP of 96.63% and low to medium volatility. Players can bet a minimum of €0.20 and as much as €400 per spin. Spreading Wilds will ensure small balance boosts during the base game and multipliers increase payouts achieved while spinning for free. Use these features well and you might end up winning up to 400x the bet.

Why to Play Wings of Riches Slot

As you play Wings of Riches, you will benefit from Spreading Wild and free spins where multiplier can boost your payouts by up to 5x and Wilds are added to the reels.

Although Wild Dandelion only lands on reels 2, 3 and 4, it can spread to the first and the last reel. By letting the wind blow away its florets to other symbol positions, Wilds can turn 2-4 nearby symbols into additional substitute icons.

It takes 3+ Scatters to activate free games with multipliers ranging between 1x and 5x and Wild symbols randomly added before each spin. The later can still perform their transformation act and give birth to new substitutes.

Each time the Multiplier icon appears on reel 5, it will increase the current multiplier by 1. Once it reaches its maximum value, the symbol is removed from the fifth reel but all remaining Free Spin wins still receive the x5 boost.

Scatters that appear during the feature award extra spins –two will award 5 additional spins and three will win you 10 more spins free of charge. 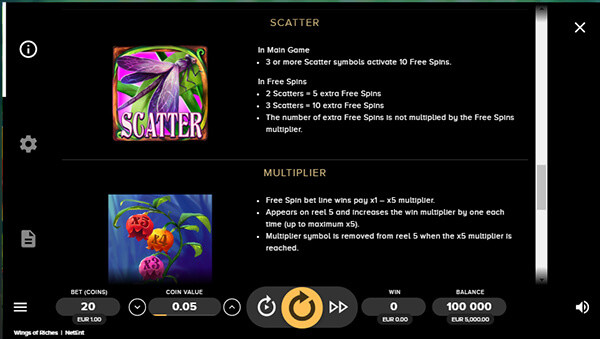 Simple games likely to appeal to both traditional slots fans as well as those that favour video slots seem to be in fashion. NetEnt manages to follow the trend and still deliver visually appealing and fun to play title. Special features, namely spreading Wilds and free games with multipliers, may not be innovative but their execution is.

We love how Wild Dandelions spread their speeds to “infect” other symbols and Multiplier symbols that randomly increase win boosters during the bonus round. We’ve also enjoyed superb graphics, clever little animations and perfectly fitting audio.