Columbus slot, not to be confused with Columbus Deluxe, is a history themed slot from Gaminator. Gaminator is less known in North America or Australia, but it’s one of the most popular land based casino software providers in Europe, specifically due to its classic casino slot machines (Book of Ra Deluxe for example).

While Columbus is nothing fancy, it can be considered a throwback to a simpler time. Perhaps, this is one of the reasons why Columbus slot is enjoyable and adored by its fans. The other reason is the payout. With 97.03% RTP, this is the loosest Gaminator slot available online.

Columbus takes the wildly popular historical approach to its base theme. Obviously kidding! I’m unsure why they chose to use Christopher Columbus as a slots theme. 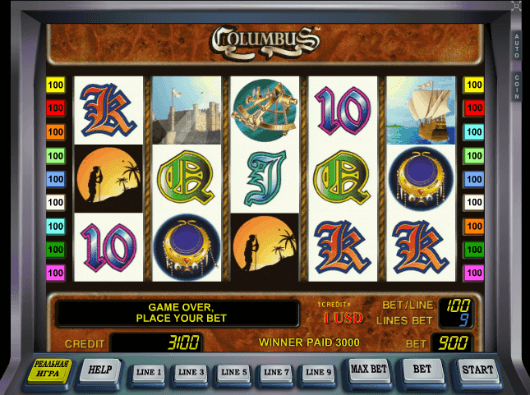 The symbols and game play portray many characters related to Christopher Columbus. You will find the famous ships he and his crew sailed on: Nina, Pinta and Santa Maria. The overall theme is simple and nothing to get excited about. It’s quite plain and boring in my opinion, but the game play is where it kicks up a bit.

Btw, there is also a renewed version of this game, Columbus Deluxe slot. It offers exactly the same bonus features and payouts, just with a new design.

Columbus has 5 reels and 3 rows of symbols. It uses 9 paylines and can be played as both a flash version on PC; or, on most mobile devices using Android or iOS.

The best paying symbols include a compass, gold necklace, Columbus and the Queen of Spain.

The wild symbol is Columbus himself and it replaces all other symbols except the scatter.

The scatter symbols are the 3 boats. There are 2 sets of scatters that will trigger the bonus features.

The blue boats will trigger 10 free spins when all 3 different boats appear on the reels during a normal spin.

The game is simple at best, but does have a nice free spin bonus. If it wasn’t for the free spins, the game would be pointless to play. Game play is easy and the rules are simple. This is a slot that will appeal to beginner and intermediate slot fans.

Where to Play Columbus Slot