There’s something just enrapturing about outer space. One look across the beautiful sky shows just how vast the whole universe is. Each little glimmering dot is a far-away sun, perhaps with its own solar system, its own people staring back at us in that exact same moment, wondering just what sort of great wonders lie hidden among those mysterious, life-giving orbs that are scattered throughout the universe.

Shooting Stars Supernova slot, a new take on the classic Shooting Stars slot machine, is played on a 5×3 playing field with 10 fixed paylines which pay both left and right, while you’re treated to some spectacular, extra-terrestrial views. It offers a few bonuses that lucky gamblers will be able to make good use of – such as Shooting Star Wilds that have the possibility to expand and activate re-spins and Supernova icons that act as mystery symbols before they all transform into the exact same regular icon from the playing field.

This new Novomatic slot machine has low-medium volatility, meaning players won’t get the same huge jackpots as high volatility titles offer, but those features are more easy to trigger, as a result. The RTP is 96.11%, which is pretty much average.

Why to play Shooting Stars Supernova

The Novomatic release has two special features available to its players. 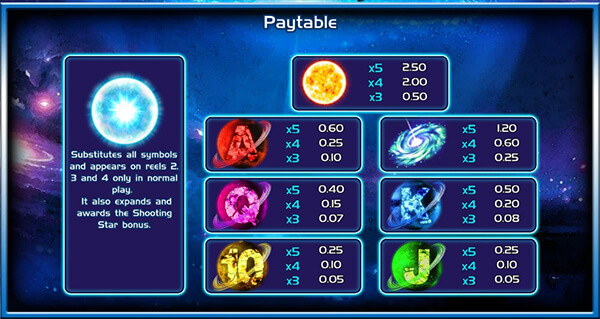 Shooting star Wilds appear on the second, third and fourth reel. When they land, they expand to cover the entirety of that reel, and then, the player is rewarded with a re-spin with the expanded Wild locked in place. If another Wild lands during this time, the process is repeated.

Supernova symbols land and transform into one of the other standard symbols or even the Wild, allowing players to use it not only to trigger the Shooting Star bonus but also to create better odds of winning.

This is a simple and to the point video slot. It has two bonuses that are quite easy to get to grips with, fun gameplay that keeps you on your toes, and a theme quite literally out of this world. This Novomatic release has great potential – let’s hope we see it realized.