While some companies might wait a little while before releasing a sequel, it seems like Novomatic was quite keen to expand their little vampire story, as we find ourselves joined by two more vampires and their various dastardly deeds. Tales of Darkness Break of Dawn slot follows up on our vampire friend from last time, Tales of Darkness Lunar Eclipse. This time around, there’s also a male vampire skulking about – perhaps our fanged monstrosity found true love?

We’re quite fond of the graphics – the unnatural, dark green glow in what seems to be a gothic mansion or a graveyard is unsettling, and a great way to set the creepy tone. This Novomatic online slot machine is played on a 5×4 playing field, with the third reel expanding to be a 1×5 during free spins, and the number of paylines doubling from 50 to 100, as well. Also during free spins, a special Break of Dawn bonus will become active, in which our vampire couple will fill the reels and award additional free spins.

The game has a high volatility, meaning players will have to sink some cash into the whole thing before seeing the results of all their hard work in the form of some great jackpots. The title has an RTP of 95%, which is a bit below average and far from best video slots online.

Why to play Tales of Darkness Break of Dawn

There is one special feature in this game.

Collecting three or more Scatters rewards 15 free spins, during which the Break of Dawn bonus comes into play. Both vampire Wild symbols can appear on the third reel – the female vampire will expand and walk off to the right, while the male vampire will walk off to the left, and each time one of them is spawned, they reward two free spins. You can also get a joint Wild symbol, which creates both the male and female vampires at the same time, which will behave just as the separate icons. 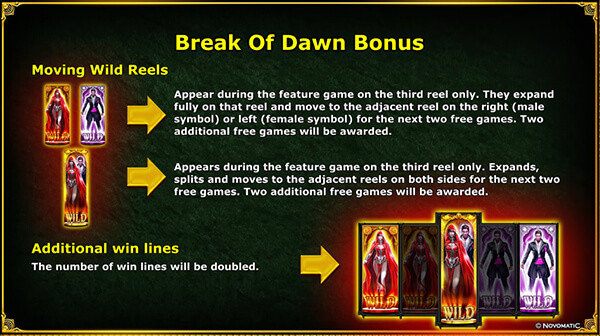 If high volatility is your thing, then this Novomatic release is a great entry for you to sink your claws into. While the feature has changed, the core gameplay isn’t different from the previous slot – if you enjoyed Lunar Eclipse, you will also enjoy Break of Dawn.