Power Keno is one of several newer video Keno variations, such as Caveman Keno, Superball and so on, which add additional payout opportunities to the classic game of Keno.  The idea with Keno is to select a certain amount of numbers, and depending on which ones are drawn, earn various payouts.

Video Keno is a new form of Keno that of course only emerged in the video gambling machine age. Then once video slots and video poker machines became all the rage in casinos, operators looked to take advantage of this technology by running video games offering Keno. Naturally, the next step was offering real money Keno games online.

Casinos had been offering traditional Keno for a long time prior to this, and was run like a lottery, with tickets being sold and draws being held on a regular basis.  Still though, the potential for ticket sales were limited, and certainly compared to slot machines, where people could just feed their money into them and play endlessly. 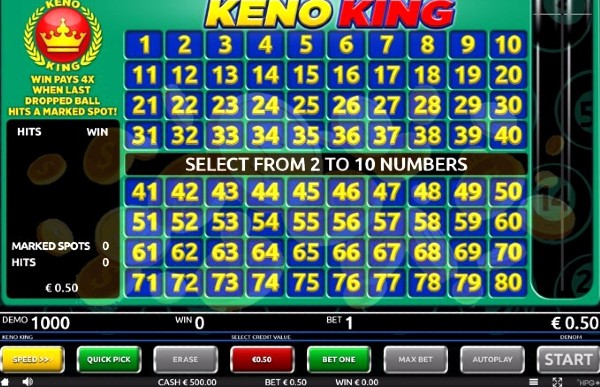 Keno though has always had a pretty good following, and the thinking with video Keno was that if players liked playing periodic Keno then they may like playing what amounts to a slot machine version of it, where players could play Keno game after Keno game and never have to wait for a scheduled draw.

This also allowed for operators to offer some new, non traditional versions of Keno, such as Power Keno, with additional features and payout schemes to entice players even more.

Unfortunately, there is no Free Power Keno available only for free play these days, but there are plenty other free keno games you can enjoy.

It’s been seen as quite important that these new Keno variations follow the traditional game of Keno quite closely, and Keno has been played for thousands of years and is certainly a very time tested gambling game.

You certainly don’t want players to have to learn a new game or a different set of rules, especially since video gamblers don’t really seem to have the same patience as table game players do, as video game players like it nice and simple, and there’s no dealers around to teach them new games either.

So Power Keno, like the other variations, proceeds exactly like all other forms of Keno do, with only one small and simple change.  If the last ball drawn is used in a winning combination, then the size of the payout is quadrupled.

While video Keno does tend to pay out more than traditional games, just because payouts can be quadrupled doesn’t mean that Power Keno pays out more than standard video Keno, as operators construct their pay tables to provide their desired house edge in all cases.

So it’s not that you’d always want to play Power Keno over the standard form with no extra payout, and the extra payouts are taken into account in the pay tables, and Power Keno averages about a 10% edge for the house. The payouts vary of course, from one casino to another. For example the version above offers an average RTP of 92% which is great, although still below some of the best online keno games.

So this is higher than you see with video slots, but playing gambling games is never just about payouts, it’s about how much fun you have, and a lot of players simply love Keno.  Many especially love the additional excitement of winning 4 times the normal amount at Power Keno.

As is typical, there really isn’t much of a difference in how many numbers you pick, although 2 numbers pays out less, 3 to 10 is fine depending on what you fancy.  Power Keno certainly does add to the game of Keno though and is well worth trying out if you like Keno.