Keno strategy and odds may seem like two different topics but they are very closely linked together. The winning odds of one play over another is going to determine what strategy should be used to play the game.

This is only the case of course if one is looking to improve one’s odds by choosing certain bets over others, and many Keno players don’t even bother with this actually.  There’s more to the game than that, and like all casino games, the house will always have the edge in the long run regardless, so beating the house over time is not even in the conversation, nor should it be.

Nevertheless, that doesn’t mean that while playing Keno for real money, you shouldn’t do some effort at improving your winning odds. That is something you can do and in Keno, it’s really not hard. There are just two rules:

Needless to say that it doesn’t mean that you can make money playing keno. You cannot. There are people out there who will lead you to believe that you can beat casino games, but casinos aren’t going to be designing or running games that they lose money at.  The only casino game that people have ever been able to beat is blackjack, as very sharp players can get a slight edge by card counting.

Casinos don’t like anyone beating them though and they work hard to find and ban these players, as they consider this to be cheating, even though it really isn’t.  They see this as being cheated out of their rightful profits though and that’s not allowed.

So Keno payout tables are designed to pay out a certain percentage to players, and unlike blackjack, there is no way around this. No matter what you do. Over time they pay out less money than they take in, which is called the house edge.  The house must have an edge as a motivation to offer a game in the first place, otherwise casinos wouldn’t exist.

Players, on the other hand, will play with a negative expectation over time, and what makes up for this is the chance for bigger wins and for the sheer entertainment value of the experience.  Simply put, playing Keno if fun, and like other forms of entertainment, it does typically come with a price, but as long as a player gets good value from the entertainment, the price paid is justified.

With casino games, there’s also the possibility of actually coming out ahead at some point, and if everyone ended up losers, there would be less incentive to play.  So some people do win, and some win big, and Keno has the potential to pay out some very big cash prizes if you get a big hit.

So whatever strategy may be correct for you is going to depend a lot on your preferences, and looking to maximize your enjoyment of the game needs to be your main concern, and not so much shaving off a bit from the house edge, unless that is what makes you the most happy.

Payout tables do differ among different Keno games, and there isn’t really a set one, so players who are interested in such things need to look at the particular payout tables of the Keno games they play or are considering playing to decide what will suit them.

One may also choose between casino games on this basis, where one keno game may offer better odds than another (see our list of best paying keno games). In general, just by playing online you have much better chances of winning. The odds online are 15% and sometimes 20% higher than in most land based casinos, which is a lot! This is certainly one of the benefits of online Keno. Although that’s just one reason to prefer it.  The convenience factor is the main one actually.

The more frequently you play Keno, the more important it will be to minimize the house advantage, as playing more means that that this house edge will be magnified more.  So hard core Keno players will want to pay a lot of attention to the odds, while more casual players may not care at all, nor should they.

If you do play on weekly basis, the other thing you should look at is how the number of picks influences your odds. Each game has a certain setting, which you can easily check. For example this is the payouts of Keno Draw game by the Number of Picks. 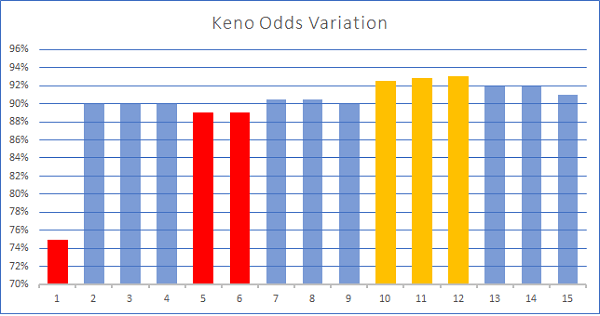 Online casinos offering Keno also provide bonuses where you can get some free play just for trying them out, usually by way of a deposit bonus.  So you put in a certain amount and they will match your deposit to a certain amount to encourage you to play there, which is always a good deal for you.

In addition to what’s called straight Keno, the classic version of it, you will also find several variations, especially at online casinos.  There’s no real advantage to choose these other variations other than to simply add some more excitement and variety to your Keno play, but these variations definitely do that, and may be worth considering.

All in all, the best Keno strategy is simply the one that makes playing the game the most enjoyable for you, and to the extent that you are successful doing that, you will get the most out of your Keno play, which is exactly what you want.