Enter a fantasy realm in IGT’s Enchanted Unicorn slot machine, in which the proud animal lord reigns across the verdant fields. It is a proper fairy tale, both with the actors that can be found within the game, and in the charms that it can offer you as a player. Prepare yourself and journey across the land, uncovering the magical power of the unicorns and the hidden treasure chests that are scattered across the land.

Worth checking out: Enchanted Garden slot by RTG

Graphics seem oddly boring, for sure for an IGT – developed slots machine. They have done better, and while it looks passable, it certainly feels outdated compared to certain other slots currently on the market. The animation work isn’t that much better, unfortunately, which can really weight down on the appearance of the game. 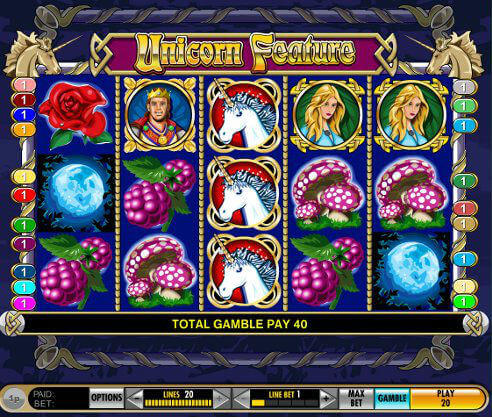 That said, Enchanted Unicorn slot has all the elements a proper fairy tale needs. A king, a princess, a lion, a red rose, an evil wizard, golden acorns, mulberries, toadstools and pinecones are all present on the playing field, each with their own treasure to give out!

But while visuals aren’t up to snuff, the slot has some fun gameplay to back it up. You can adjust the amount of active paylines and your bet level, allowing you to play with $0.01 up to $5 per spin, something that should appease low roller slot players as they do not have to spend too much money to play, unlike other IGT games which were obviously aimed at medium and high rollers.

Three important things to pay attention to in this slot. First off, Wilds! They come in the shape of this game’s mascot, the unicorn, and have quite a few valuable things attached to them. They act as a multiplier, increasing all the wins they are a part of, but they can also transform an entire reel Wild. Wilds only appear on the second, third and fourth reel, and can increase the multiplier to a maximum of 8x the original wager.

Scatters comes with a full moon symbol, and is another layer of multipliers on top of the existing ones coming from Wilds. Depending on how many moons appear on the reels, Enchanted Unicorn can award you up to a 100x multiplier for all five active at once.

Finally, treasure chests can also appear. Apart from also being a random multiplier increase between 2x to 148x the player’s total bet, it also transfers you to a different screen during which you try to escape the Dark Wizard’s sorcery. You unlock prizes along the way, but be careful not to step on the wizard, or your bonus is lost!

A well-rounded slot that allows you to bet small, but still win big. Stepping out of their comfort zone of offering games only to medium and high rollers, IGT makes a very powerful statement that it can play with the best of them. While the graphics are in sore need of an update, the gameplay itself shines through like a beacon, making this a great experience for us.