What is your attitude towards aliens? Are you afraid of them or you can’t wait to meet them and secretly wish they would visit our planet soon? Do you think they look just like popular culture describes them – little, green creatures? Well, the team made up of International Game Technology (IGT) and AC Coin and Slots developers embraced the popularly accepted opinion years ago and created a slot machine entitled Little Green Men. It has to do with green aliens from outer space invading Earth, but regardless, they try to bring you some outstanding prizes as well.

Aliens, btw, is a quite popular slots theme. Here are some you can enjoy online: Spaces Invaders by Playtech, Invaders by Planet Moolah by WMS and Aliens by NetEnt.

Little green aliens can bring you winnings across 20 paying lines, and you can wager as much as 100 coins per spin, or only start at 5 if you don’t want to show too much ambition right away. 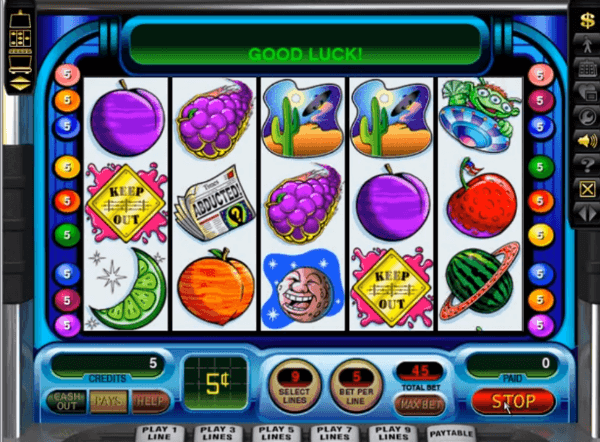 There is a laughing moon symbol that works as the Wild and a newspaper reporting alien abductions that is important for special features which we will describe next.

Let’s start with a Purple Flash feature. He is actually a really helpful little green guy, despite being called Purple Flash, who has three eyes and the capability to turn other symbols into Wilds with his laser. Just think of the payout possibilities when all those Wilds complete winning combos!

Next, we have Bonus Round 1 known as Free Credits round triggered by symbols of aliens, three of them at least. The point is to pick flying saucers that give you free coins, and you can win a maximum of 500 coins. But if you pick the saucer that ends the round – better luck next time. Just kidding, even then you will get consolation credits for the remaining unpicked saucers.

The Bonus Round 2 is triggered by the newspaper symbols. It is also a picking game where you get to decide which human (or animal, since there is a dog as well) is going to be beamed up into space. The screen shows the newspaper with a picture of the character that was abducted and a number of credits you won by helping the aliens.

Two greatest values of the game lie in cute cartoonish graphics and innovative bonus rounds. As you may have noticed from our description these are not typical free spins rounds, but rounds that reward the player directly by giving away extra credits to play with or to cash out whenever you choose. There’s potential to both win big and have a lot of fun by playing Little Green Men – we recommend it!