Lobstermania 2 slot machine, released by IGT in 2015, is absolutely packed with fun and high profit-potential features. Luckily, you can enjoy both of these superb IGT slots online as well, and even try them for free.

Playing with fixed 60 coins, by choosing coin value you’ll be able to bet between 60 and 600 coins on fixed 40 paylines.


If you’ve already played the No. 1 in the series, you’ll find a lot of familiar symbols in this one. Don’t get confused as your highest value symbol now becomes the buoy, followed by the boat, lighthouse and boatyard.

Pay attention to another difference as the Wild is now represented by icons with the wording Lobstermania 2. ‘Icons’ in plural is not a spelling mistake as another novelty vs Lobstermania original is that it features two Wild symbols instead of the usual one. 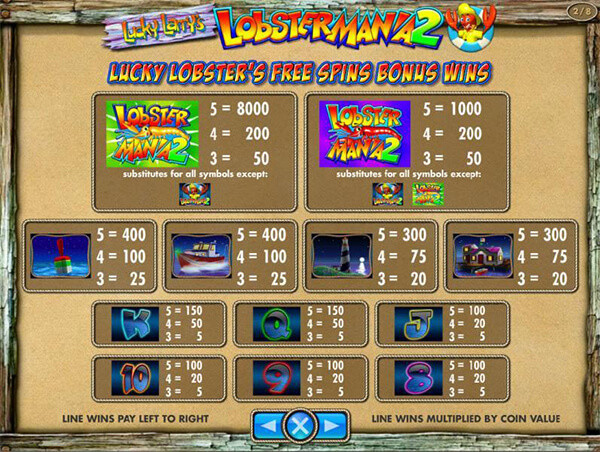 Welcome the new Jackpot Scatter! On each spin, Jackpot-labeled board may appear over any symbol except the Lobstermania Lobster. Appearing in any position on the reels it will act as Wild. More importantly, will pay a Jackpot win of up to 50,000x your coin value if appearing on 3 or more consecutive reels.

The new Multiplier feature introduces multipliers 3x and 5x, which only appear on 3rd reel and multiply the line win by 3 and 5 respectively.

Bonus is once again represented by the Lobstermania Lobster and landing 3 of those on a played line will trigger the Bonus Picker. You’ll get to choose between Lucky Larry’s Buoy bonus and Lucky Lobster’s Free Spins bonus. Either way, before you proceed to the picked stage, picker will award you 40x to 95x the coin value.

Choosing the Buoy bonus, you not only collect cash with each lobster pulled, you also get a chance to catch the Golden Lobster which will than further reward you with an Octopus, Kangaroo or Pelican bonus and between 160 to 1,000x the coin value.

Having judged the original game to be a simple one suited for beginners, we find that with Nr 2 Lobstermania has moved to a completely different level.

While the graphics have shown little improvement, numerous new symbols and features, including the multi-layered bonuses, make the game super exciting and offer various possibilities to hit impressive wins.