Wrapped in a mysterious, romantic aura, the 7 Sins slot game from Play’n GO is a visually enticing title revolving around the seven deadly sins presented in the form of seven attractive and quite charming ladies.

What we have here is a 5-reel, 3-row slot with no less than 243 different winning ways and three highly rewarding features during which you will be quite handsomely rewarded for your efforts.

The RTP of 7 Sins stands on solid 96.28%, just a bit below Play’n Go top slots, such as Energoonz and Gold Trophy slots, which offer 97% lifetime return.

Filled with classic card symbols as the low-value denominations and girls representing the seven sins as the high paying icons, 7 Sins game features a visually enticing screenplay that will seduce you into hitting the spin button.

The main feature of the base game are the lucky 7s which are acting as Wild and which appear as doubled symbols on reels two and 4. This doubled Wild is basically valued as two symbols, which means that five in a row will actually be seven of a kind, boosting your winning potential significantly.

7 Sins comes with highly exciting bonus features. Three of Pandora’s Box Scatter symbols are responsible for initiating the Free Spins feature, during which you will be rewarded with… 7 complimentary rounds. Every spin comes with one of the seven ladies taking centre stage. Ladies will remain expanded on the middle reel,

You can also enjoy multipliers which go from 1 to 7. 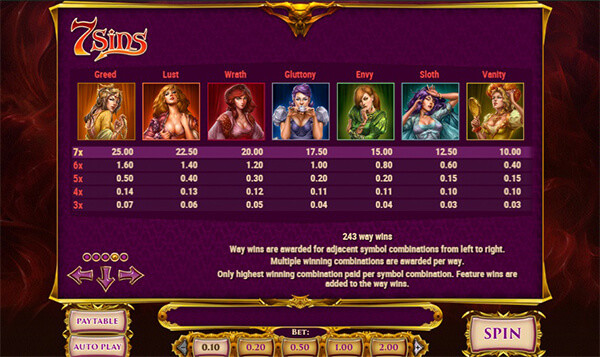 Ultimately, this great game offers a Second Chance feature which activates once you land two Pandora’s Box Scatters on the reels. The game “wants to help you” land the additional one to initiate the Free Spins or reward you with instant cash prizes going up to 15x the total bet as you go along revealing your prizes by picking one of the seven sin figurines which will appear on the reels.

Play’n GO have treated us with yet another aesthetically beautiful release, which serves as a great addition to their impressive portfolio of games. 7 Sins slot is unlike anything we’ve seen so far, graphically speaking, as it is spooky and sensual at the same time.