Raging Rex is a video slot centred on everyone’s favourite lizard species. And while dinosaurs may be extinct in the real world, they still live on in this new Play’n Go casino slot. You will find multiple species still wandering the reels without a care in the world. Alongside them, players will see various animals encased in amber, their corpses preserved for future examination.

Thanks to the transparent reels, gamblers are in for a visual treat, with a beautifully animated background image. The game is played on 6-reel, 4-row playing field with 4,096 ways to win. Special features include the Rampage re-spins, free spins with unlimited re-triggers and one of two bonuses that players can pick to enhance the special feature.

The furious T-rex awaits all challengers who think they are worthy. Will you succeed in the face of danger? Or will you simply end up the dinosaur’s next meal?

Why to play Raging Rex Slot

We like the fact this slot does not take shortcuts. Rather than using two generic special features and calling it a day, the developers went the extra mile. As a result, both bonuses feel great when they appear on the reels, even if they can be somewhat rare.

When the angry dinosaur comes knocking, everything else moves to make way. So long as a fully stacked T-Rex exists on the reels, free re-spins will be awarded to gamblers. The dinosaur moves one reel to the left each re-spin, while the other position on the board change around him. The Rampage special feature ends when the T-Rex reaches the first reel.

Three, four, five or six Scatters rewards eight, fifteen, twenty or thirty free spins, respectively. Players can win additional turns by collecting Scatters while the bonus is already being played. Free spins have a guaranteed 5x cash prize if you win less than that amount somehow. During Raging Spins, players can pick between two different mini-features that enhance the free spins to your liking. These are: 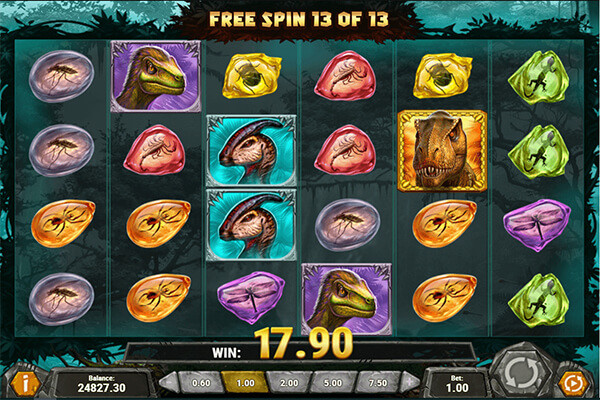 Raging Rex slot has every part of it fine-tuned for maximum enjoyment. The graphics are top notch, the gameplay is fun, and the bonuses all bring some fantastic winning potential. If what you have read in the review so far sounds fun, give it a spin. Just make sure to mind the high variance!