Ah, money. Just about everything in life seems to revolve around it nowadays. People will do all sorts of crazy things if you make it worth their while. You have a website where you can hire all sorts of talented people to do something for five dollars, you can dare your friend for a twenty to do something hilariously stupid, and you wouldn’t believe it, some people actually keep pressing a spin button over and over, hoping for a big jackpot win to happen. Can you believe that last one?

You probably can, or else you wouldn’t be looking at this Rival Gaming casino slot with a 3×3 playing field and 5 fixed paylines. It has some seriously uncomfortable looking characters, which is a shame because everything else is rather catching visually. As far as bonuses go, you have free spins for collecting Scatters, and all Wilds come packed with a 3x multiplier.

We weren’t able to fish out any information about the game’s volatility, but we were able to find it’s RTP, which is 94.35%, sitting below average for video slots and lower than what Best Rival slots have to offer.

Why to play Almighty Dollar 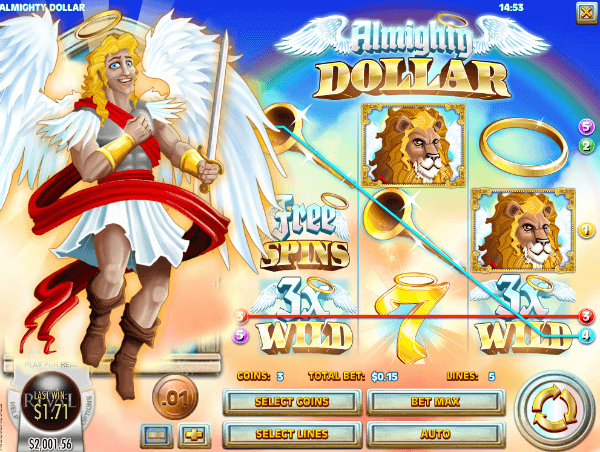 There are two bonuses in this Rival Gaming release. The first of which is a 3x multiplier applied to all wins with a Wild in them. The second is a free spins bonus, awarding 7 or 21 extra turns for collecting two or three Scatters.

We don’t like putting down hard work developers put in, but there’s really no getting around the fact this is well below expectations for Rival Gaming. Almighty Dollar has bad graphics, a below average RTP, an unknown volatility, only five paylines, and relatively simplistic and boring features. It has no real redeeming qualities, so we really can’t recommend it to you.