Queen of the Nile Slots

Queen of the Nile slot is one of the most known and copied slot machines in history. It was actually the first slot to introduce the 15×3 feature (15 free spins with x3 multiplier). Since it was first launched in land casinos in late 90’s, it spun a long line of reproductions, one of them being the most famous Cleopatra Slot (by IGT). Queen of the Nile might appear a bit outdated to some, however it is still a pure classic.

There are actually 2 versions of Queen of the Nile slots. Surprisingly, Queen of the Nile 2 was the first to make its way online, and only recently, due to its huge fan base, Aristocrat added the classic version of the game as well.

Queen of the Nile is a 5 reel, 20 pay lines. It was one of the first Ancient Egypt themed slots, which later became extremely popular. The wild symbol is represented by Cleopatra. Each time it substitutes in a winning line – all your winnings are doubled. The Pyramid is the scattered symbol. 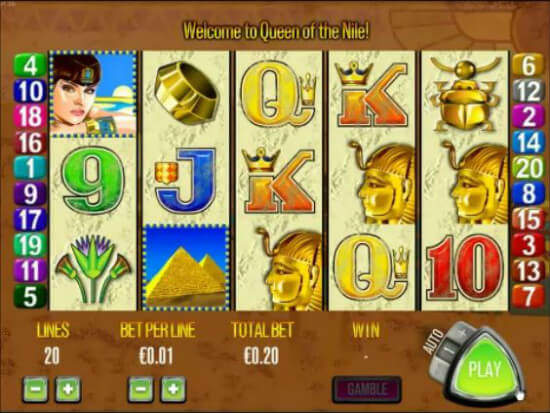 Queen of the Nile is a simple and middle/low variance slot. The main bonus feature is the 15×3 free spins. In order to trigger the free spins you’ll need to get 3 or more Pyramid scattered symbols anywhere on the reels. As you probably guessed, this will give you 15 free spins with x3 multiplier, which you can later retrigger.

Queen of the Nile is one of the most influential slot machines and many tried to take advantage of its popularity. The most famous is of course the Cleopatra Slot. Aristocrat themselves launched other 15 Free Spins X3 slots, such as Geisha and Dolphin Treasure. Btw, the most popular Aristocrat game, besides Queen of the Nile, is the Buffalo slot.

If you are looking for other Egypt themed slots, then it shouldn’t be hard. The most popular are The Book of Ra and Pharaoh’s Fortune by IGT. US players can enjoy RTG’s Cleopatra’s Gold slot, Rival’s Cleopatra’s Coins and WGS (Vegas Tech) Cleopatra’s Pyramid.

Queen of the Nile Slots was last modified: February 24th, 2021 by Mark Cesley