Launched midway through 2014 on desktop and mobile, Lady Robin Hood slot machine was developed by Bally Technologies and it acts as a feminine version of the famous English folk legend. And while the game does contain quite a few extra features, the 94% theoretical return to player is obviously far from impressive.

Lady Robin Hood is played at five reels and fixed 40 paylines, which is not exactly a perfect scenario, but $0.40 minimum wager per spin is unlikely to prove a problem even for amateur players. By increasing bet per line, you can stake up to $400 at a time. 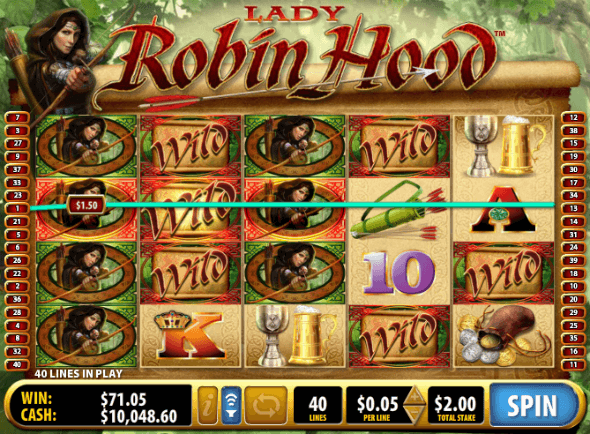 Similar to many Bally casino slots, such as Pharaoh’s Dream and even the famous Quick Hit slots, the look of Lady Robin Hood slot is a bit old-fashioned. Win and Cash amounts are displayed on the left side of the bottom panel, followed by Information, Sounds and Autoplay buttons. Lines, Bet Per Line, Total Stake and Spin complete the list of icons found here. Meanwhile, the lady, quiver, dagger, flagon and coins are some of the symbols populating the reels.

A total of 10 free games will be played where all prizes are doubled. You also get three arrows when the feature starts and another arrow for each Target icon appearing. These help you fill the shields and in turn trigger Wild reels.

We have to say that when it comes to mobile, this game is not an exception to other Bally slots. Somehow they ignore the fact that Vegas casino slots need to be adjusted for mobile play and not just launching the same game on mobile. The slot is available on all mobile devices from Iphone to Blackberry, but it looses some of its appeal on smaller screens.

Lady Robin Hood is an attractive video slot that gives a familiar story an interesting twist and we have to admit it is quite easy on the eye, even though not exactly top notch. However, the 94% return to player is enough to suggest that your chances of turning a profit are not high, for sure compared to other slots developers, such as NetEnt, Playtech and Microgaming,where the return can reach even 98%.