The intergalactic slot machine, released by the ingenious Betsoft casino slots developer, will, indeed, provide you with an out-of-this-world gaming experience. Arrival slot machine uses 5 reels and 30 paylines, whereas the top prize up for grabs equals the incredible amount of 10,000 coins.

The 3D slot machine is unique in so many ways and truly breaks away from the crowd. The graphics and multiple bonus features that are sure to set the pulse racing and keep you spinning for hours. The entire playing interface simulates a spacecraft. Even the Spin and Bet buttons are devised in such a way to resemble controls for the screen in front of you, with a surprising twist to it, which comes in the form of an animated alien, taking charge of the reels on your behalf.

However, the game has one huge drawback. The RTP of Arrival slot stand on just 92.26%. For an online slot that’s pretty horrible. BetSoft slots such as At The Copa and Good Girl Bad Girl pay above 97%, so to settle for just 92% seems irrelevant.

Arrival slot features by far one of the best graphics you could possibly imagine, with an alternate reality serving as the main subject of the game in which each and every detail is composed in such a way to create an impressive offering you can hardly resist.

The futuristic game revolves around the sci-fi theme of the Earth being threatened by aliens, so it comes as no surprise that the symbols populating the reels involve planets, spaceships, asteroids, and evil alien brain, to name a few. Finally, the soundtrack aptly matches the outer-space concept and adds to a great deal of suspense that the whole release is pervaded with.

To our great surprise, the innovative title doesn’t feature Wild symbols, least not in the usual sense of the term. That being said, if you manage to spin three or more alien pilot graphics anywhere on the reels, you will trigger the Abduction Wild Reel feature that awards free games during which a UFO will float over a reel, turning the entire reel Wild. This particular feature is the most lucrative one, that provides you with a chance of winning a mind-blowing sum. 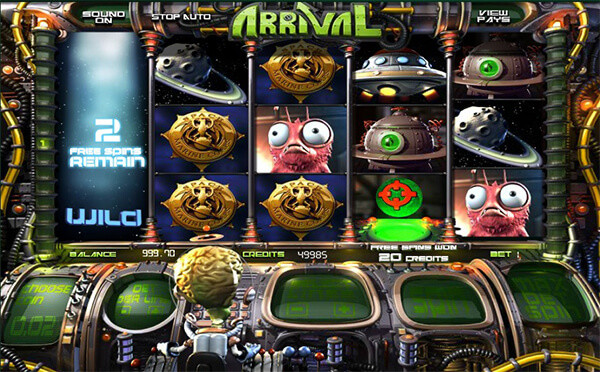 To activate the UFO Click Me bonus game, you are required to land three ray gun Scatters anywhere in view. In such a way, you will be prompted to pick different UFOs, each one hiding instant cash rewards.

During the Abduction bonus game, you will see the Brain alien kidnapping one of the female marines, while an astronaut must make use of various controls to release her from the infamous alien. To activate the feature, you need to spin at least three girl symbols on any of the reels and then press buttons so as to let her free, but more importantly, to receive a hefty cash prize.

Arrival slot presents us with a full gaming package which ensures a high level of entertainment and action on the reels. The game falls into medium to high volatility, whereas payouts start at 10x your line stake and increase all the way up to 400x your bet, for lining up five marine astronauts on a single payline.

The minimum stake you can wager is $0.60, while the highest amount you can stake can go up to the maximum of $150. Last but not least, the slot machine features an appealing, non-progressive Jackpot worth 10,000 coins.

However, all the positives are overshadowed by the insanely low RTP, which is very strange. Bottom line: there are better slots to play.