We hope you’re not afraid of clowns because this Microgaming slot has them in droves. This slot is themed around the circus, and all its many performers when they come to town. It used to be relatively popular back in the day, but how has it held up now?

Honestly, not that great. The graphics are very clearly primitive, using a lot of playing card symbols, and the existing icons don’t look bad, but they also lack any animations or visual flair that modern games have. It also doesn’t have any special features, meaning your only source of entertainment is simply pressing the spin button and hoping you land a win. The title makes up for it with some good pays and a high maximum bet, but even that isn’t without its downsides.

The title is a low variance game with a 96.64% RTP. This means that for the most part, you won’t lose all your cash really quickly, but the jackpots, by extent, also aren’t amazing. It still within Top 10 loosest Microgaming slots but far from Break da Bank Again, Hot Ink and others.

Why to play Big Top 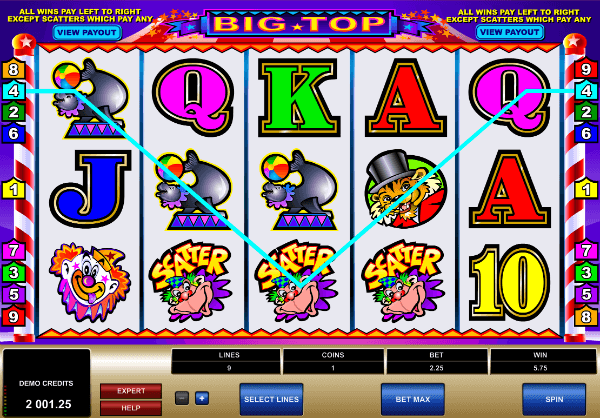 Despite being all about clowns and the circus, Big Top doesn’t offer any entertainment in form of special features.

Honestly, we’re quite conflicted on this Microgaming release. It’s clearly a product of its time, back when slots were simpler and boring. If we were reviewing it back when it came out, the high cost would probably be our only gripe. But now, in 2018, we have to look at its competition as a whole – and it just fails to measure up.