Any fan of progressive jackpots worth their salt has heard of the Age of the Gods slots. We don’t think it’s that big of a stretch to say it is Playtech’s most popular series! So when a new instalment comes out, you bet there’s going to be a lot of interest involved! Centred around the Greek god of sun and light, it’ll have you chasing re-spins while waiting for the progressive jackpot to trigger!

The reels keep the reels separated from the remaining background image with a pretty golden border. You play this slot on a 6-reel, 4-row playing field with 50 fixed paylines. Available special features include a re-spins bonus with a moving Sun and the progressive jackpot trigger.

If you’re ready to risk it all to claim the power and wealth of a god, then you’ve come to the right place. Get ready to soar through the skies as you play this game!

Why to play Age of the Gods Apollo Power Slot 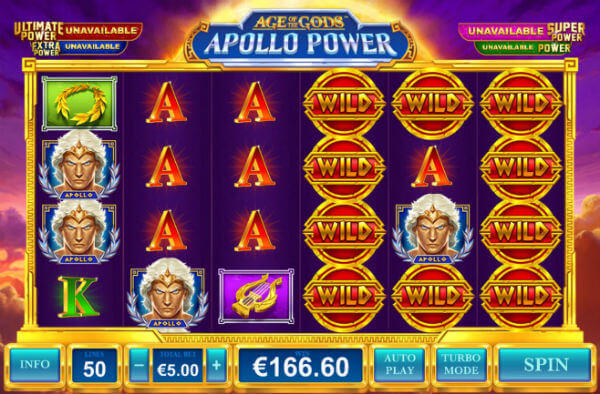 That said, the special features of Age of the Gods Apollo Power slot machine can be stellar under the right circumstances. All you need is a dash of luck – and that progressive jackpot’s as good as yours.

When a Wild lands on the reels, it activates this bonus. A Sun Wild will appear in a random position on the board. It will then move to a different position, creating new Wilds on the path it takes. Re-spins continue until the Sun Wild reaches its original position, ending the bonus.

On any random spin, there’s a chance the progressive jackpot triggers. If that happens, you are taken to a 5×4 board, where 20 face-down coins await you. Clicking on a coin will flip it, and reveal one of four colours: green, blue, pink or red. The more valuable a jackpot is, the more coins it requires before you can win it. The first jackpot whose coin collection you complete is the one that you win.

Visually, Age of the Gods: Apollo Power is some of Playtech’s best. That said, this sequel’s gameplay is somewhat of a mixed bag. Personally, we enjoyed the special features, but we can see the need for at least one more bonus. In the end, we decided to recommend it anyways. We had too much fun playing it to pass up on it.