Age of the Gods Slot

Take a walk through Mount Olympus, the residing place of the Greek Gods and while you are at it, try to win one of the progressive jackpots and start living like a God.

Similar to other Greek Mythology slots, such as WMS Zeus and Zeus 3, Age of Troy and others,  Age of the Gods slot features all the familiar names: Zeus, his brother Poseidon, Zeus’s wife Hera, daughter Athena and his half son Hercules.

The mighty Gods can summon some powerful features, so each of the Gods will grant you a share of his or her own might through the Free Spins. This sharp-looking Playtech slot can be played on any device, desktop, tablet or mobile, without losing on its amazing quality.

You can also check another Age of Gods Slot machine, Apollo Power slot.

The first thing you need to know about Age of the Gods slot is that it keeps 20 fixed paylines in store, which means that the coin value you select will be multiplied by the number of reels. This comes down to the minimum bet of $0.20 and the maximum stake allowed of $500. The range is pretty wide to cover any budget, but you should know that if you are going for one of the progressive jackpots, you should stake the as much as you can, as higher bets increase the chances of winning the jackpot.

The Gods will pay for combinations of 3, 4 or 5 matching symbols on the paylines, while the Athena is the most valuable one, as she pays 1,000 times your stake for five of a kind. Pay special attention to the laurel wreath that functions as a Wild and apart from the fact that it can stand in the place of any standard symbol, it is the only symbol that pays for two of a kind.

The lifetime return of the game is 95%, which is quite average for an online slots machine. For sure compared so what some loosest slots have to offer.

Greek Gods are symbols of abundance and might, so it is no wonder to see this slot packed with special features. Each God will feature his or her own version of Free Spins, but first you need to land three or more Scatters (logos of the game). That is when you stand to win 9 Athena Free Games with a random multiplier, 9 Zeus Free games with increasing multiplier and locked Wilds, 9 Poseidon Free Games with random Wilds or 9 Hercules Free Games with staked Wilds. 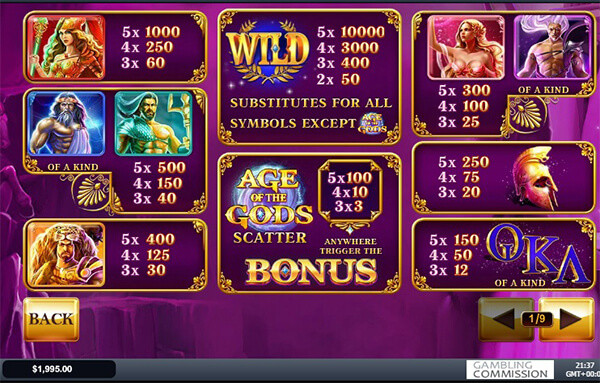 The Gods will reward you during the base game as well. If you find all five of them on the reels, they will return your stake 200 times. This is called the Pantheon of Power feature.

Age of the Gods is truly a magnificent slot that offers plenty of action and thrill, promising of high payouts, if you manage to trigger the right features. It comes with medium to high volatility which adds to the excitement of the game making it one of the best progressive video slots on the market.

Age of the Gods Slot was last modified: February 24th, 2021 by Mark Cesley