Halloween Fortune is a Playtech-powered online slot released in 2012. The 5-reel slot played at up to 20 lines features three attractive witches which will brew some magic potions to help you win bigger payouts.

Offering up to 20 free games with awards subject to multipliers going up to 10x, the slot is potentially highly rewarding and the maximum payout you can win stands at 2,000,000 coins. As soon as you enter the strange place governed by three witches, you will be literally bewitched by an engaging soundtrack and spooky sound effects, so take a deep breath and spin the reels for some hefty payouts.

Notice that there is also a new version of this game, Halloween Fortune 2 (see video below), and although it is nice, your chances of winning there are much lower. The original game comes with superb 97.06% RTP, while the new version offers return below 95%.

Inspired by Halloween, the game looks amazing with all symbols serving well to its theme. On the reels, you will meet three seductive witches, black cats, ravens, skulls with candles, magic potions and amulets.

The game is also home to three special symbols. The carved pumpkin represents Wild while the cauldron acts as the Bonus symbol. The Halloween Fortune logo stands for Scatter that awards prizes ranging between 5x and 50x your total bet.

The graphics are adorable and accompanied with cartoon-like animations. When included in a winning combination, the winning witch will fly away on her broom into the night which contributes to the overall atmosphere of the game.

Wild will complete your winning combinations but it also pays on its own. Actually, Wild is the top paying symbol in the game awarding 10,000 coins for a five of a kind combination. Scatter only delivers awards, while the Bonus symbol is responsible for triggering the Witches’ Brew Bonus feature during which you will benefit from free spins and multipliers. 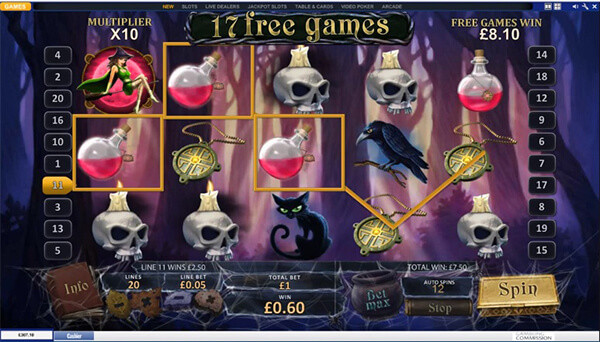 It takes only two cauldron symbols to trigger the feature, but they have to appear anywhere on the first and last reel at the same time. As soon as you unlock the feature, you will be offered to pick one of three witches to reveal the number of free games. This number can be anywhere between 3 and 20.

Once you have chosen a witch, she will take you to her chamber where she brews magic potions. A total of 6 bottles in various colours will appear and you are supposed to pick one of them to reveal a multiplier that will be applied to all payouts from free games. A multiplier can be between 2x and 10x. If you are lucky enough to land another pair of Cauldron Bonus symbols, you can win more free games with the same multiplier.

With a huge top prize and a potentially rewarding free spins feature, Halloween Fortune is a highly exciting game to play. You don’t have to wait for the Halloween season to enjoy it, as its rewarding features can make your day throughout the year. With the RTP of 97.06%, the game pays quite frequently, so we recommend giving it a try. A betting range spreads between $0.20 and $200, which makes Halloween Fortune a perfect fit for all kinds of players.

By the way, Playtech do offer some slots with higher payouts. Those are Golden Tour and some 3-reel classics – Ugga Bugga, Tropic Reels and Goblins Cave.