Created in a cooperation between a famous Hollywood studio, Universal Pictures, and a well-known gaming company, Playtech, King Kong slot, or by its full name, Kong the 8th Wonder of the World, is an astonishing game that brings the highest standards in graphics, at least in online slot games terms.

Played in two different modes and enriched with frequent scenes from Peter Jackson’s King Kong movie released in 2005, this game represents a successful example of a movie-themed video slot. Switching you from one to the other mode, King Kong by Playtech will keep the dynamic pace during the game and ensure a long-lasting entertainment for most players.

You should know that there are at least 3 slot machines on this theme. You can find here the comparison of all King Kong slots online. (Plus a semi related King Kong Cash).

This video slot allows you to determine the number of paylines, 1 to 20, as well as the bet per line, $0.01 – $1, which is great for high rollers and penny slots players. Bet max button spins the reels with all 20 paylines by keeps the bet per line unchanged. Regular symbols include 5 main characters from the movie King Kong and card values (A, K, Q, J and 10) as the low paying symbols. While Naomi Watts and Jack Black maybe sell the tickets at the box offices, in this slot the biggest action revolves around King Kong. 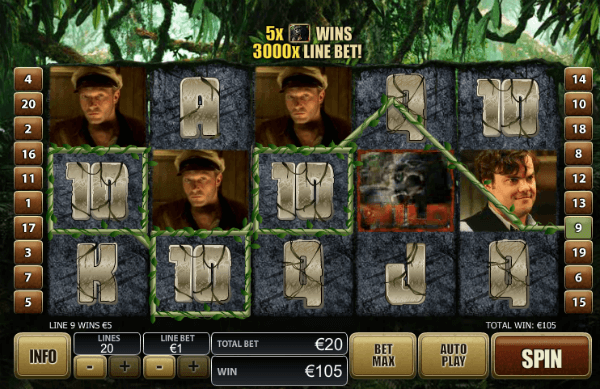 Kong is the Wild symbol and substitutes for all regular symbols, while the game logo represents the Scatter symbol. However, these two symbols have the power to trigger the game features depending on the mode you are playing at the moment. There are two modes with the same pay table, but different appearance and bonus features – Jungle Mode and Big City Mode.

Three Wild Kong symbols that show up simultaneously in Jungle Mode award 3 free respins with Wild symbols frozen during the feature. This feature is called Wild Jungle Respins, but if you get 3 Wilds during the Big City Mode you will be awarded with a different feature named Wild Kong Respins with Wild reels.

Again, three scattered Logo symbols award you differently, according to the mode you are currently playing. In the Jungle Mode you will get Skull Island Bonus and in the Big City Mode the corresponding feature is called City Tower Bonus. Both of the features award with decent cash prizes.

King Kong slot by Playtech is perfect for the fans of action movies and modern 3D video slots. Playtech has shown us how a movie can be flawlessly incorporated into a slot game and give birth to a successful game with stunning visual effects that keep you amused for hours.